Greater Gainesville is growing up 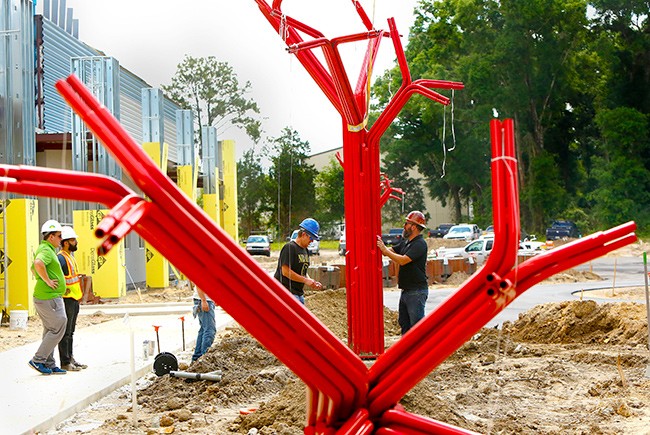 Trending toward transition and innovation in Gainesville

Agriculture. In a county and city that are in transition, incrementally trending toward urban, the Alachua County Cattlemen’s Association — an influencer of public policy for more than 60 years — remains strong, while agriculture, natural resources and related industries make up an economic powerhouse.

In Alachua, the most recent tally (2016) reveals $1.49 billion in gross regional product from agriculture and related industries, representing 11.8% of the county’s total GRP, according to data from the University of Florida’s Institute of Food and Agricultural Sciences.

Energy. Expect energy to be a very big deal in Gainesville. “We want to make Gainesville a center for energy,” says Rich Blaser, one of two CEOs (the other CEO is Darin Cook) for Infinite Energy, which provides retail natural gas in Florida, Georgia, Ohio and New Jersey, as well as retail electricity in Texas.

Infinite Energy is the largest energy company in Gainesville, even larger than Gainesville Regional Utilities in terms of revenue and customer count. Currently, the company is quadrupling its space to 33,000 square feet and designating two of its smaller buildings as an incubator for energy startups.

Gainesville is becoming quite the startup city, and with that brings much innovation.

We want to take advantage of that and help energy innovation thrive here,” Blaser comments.

Manufacturing. Seeking to attract manufacturing jobs, and targeting Gainesville’s east side, the county, city and UF are collaborating on 37-acre Eco-Industrial Park. Essentially, the park is a step beyond recycling — supporting the region’s recycling and zero-waste goals by co-locating private sector reuse, recycling and manufacturing in dedicated resource-recovery spaces.

Regional Activity. Greater Gainesville continues to show development strength as a region, with places such as Alachua, Hawthorne and Newberry in the midst of big plans. Alachua has 82-acre San Felasco Tech City in the works. Hawthorne Industry Park, consisting of 1,068 acres, is ready for industry and commerce through a public-private partnership led by Weyerhaeuser and the City of Hawthorne.

“That gives the region an opportunity to grow from a job standpoint and the city of Hawthorne to grow its tax base,” says Rosemary Fagler, economic development manager for Weyerhaeuser.

Meanwhile, the city of Newberry is planning Agri-Tech Innovation Park, where knowledge would be shared among university, government and private research entities.

Project Wildcat. Alachua County is in discussion with the U.S. Army Reserve 81st Readiness Division on use of the county’s Fairgrounds Redevelopment Area to bring an Equipment Concentration Site and associated economic benefits to east Gainesville in 2022. An Equipment Concentration Site provides warehouse services, vehicle repair, storage and related training for non-combat vehicles. The effort has been dubbed Project Wildcat. The local economic benefit is estimated at $30 million for site improvements and construction.

Gainesville Inequities Study. In January 2018, Gainesville and the county, along with education, health and chamber of commerce leaders, released the results of an area study that continues to garner policy and funding attention today. The “Understanding Racial Inequity in Alachua County” study revealed significant equity/social services gaps for ethnic minorities, especially African-Americans, who compose nearly 20% of the population. Among the chief points of concern are affordable housing and hunger.

Corrective actions are ongoing, according to Alachua County Manager Michele Lieberman. “The collaboration is really a big key, because it’s addressing the issues that are happening in the community,” Lieberman says. “There’s a great sense of community in working together to resolve them."