Alachua County is an education epicenter 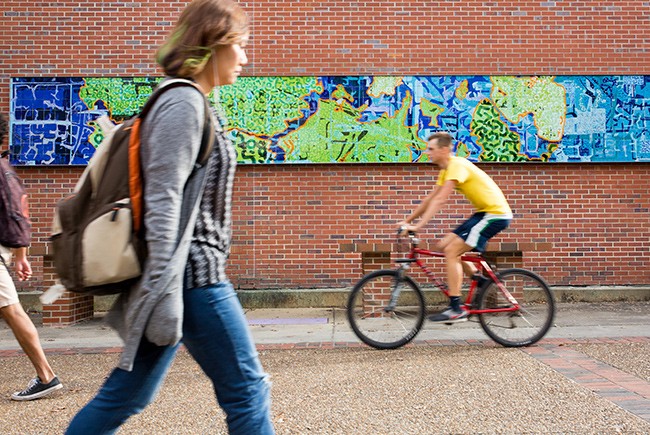 Few could argue that Gainesville — all of Alachua County, in fact — is an education epicenter.

There are 16 colleges/universities along with 200-plus research, service and education centers, bureaus and institutes. All totaled, approximately 75,000 college students travel the roads in and around Gainesville to get to school.

With its more than 35,000 undergraduate students representing only a starting point, the story at the University of Florida is wieldy and encompassing. Yet, it’s also simple: The plan is to become a top-five public university nationwide.

In other words, preeminence, an initiative launched in 2013.

Already, the effort has resulted in a spree of faculty hiring and planned construction. On its way to hire 500 new faculty, UF has risen to No. 8 among the nation’s top-10 public universities, as ranked in U.S. News & World Report’s Best Colleges list. Meanwhile, plans for capital improvement include new academic buildings and a new honors college.

"Great universities are societal engines that drive innovation, transforming the lives and livelihoods of the people they serve," comments UF President W. Kent Fuchs, Ph.D. "As a state, Florida is poised to emerge as a national and international leader for industry and sustainability that will herald a new era of growth and success. In becoming a top-five institution, the University of Florida can be a critical catalyst in recruiting the talent, combatting the challenges and disseminating the knowledge required of a state on the move."

A few specifics: Total revenues or applicable expenditures made within the state for UF and affiliated organizations were $8.98 billion. That included $2.72 billion for university operations, $1.34 billion for technology licensing companies, $3.87 billion for health care and other direct-support organizations, $686 million for student spending, $306 million for campus visitor spending and $50.1 million for construction.

Across Alachua, total economic contributions in 2017-2018 were estimated at 104,773 jobs and $12 billion in industry output, representing 60% of total county employment and 56% of the county’s gross domestic product.

Historically speaking, Santa Fe College was established in 1965 as a “community college” to broaden higher education access in Alachua and Bradford counties. Today, the college has grown into a four-year institution with more than 22,000 students and national distinction — winner of the 2015 Aspen Prize for Community College Excellence. Since 2012, the college has consistently ranked among the top 10 U.S. community colleges.

Most notably, in October 2018, the college announced plans for an expansion in downtown Gainesville, adding a three-story building (80,000 square feet) to its existing Blount Center location by spring 2021. Construction is set to begin early next year.

The Blount Campus will be home to Santa Fe’s Center for Innovation and Economic Development and become the college’s anchor for business and IT education, as well as entrepreneurship. Those plans were strengthened in May when Santa Fe received a $4.8 million grant to help fund the center’s expansion.

“Santa Fe College has made many investments for our students and communities,” notes Santa Fe President Jackson Sasser, Ph.D. "None will have a more direct impact than the expansion of the downtown Gainesville campus."

Similarly, in K-12 education, the presence of UF and Santa Fe College offers advantages to students in area public school. Each year, approximately 25 students graduate with both a high school diploma and an associate’s degree through Santa Fe’s dual-enrollment program, and Alachua County Public Schools has strong articulation agreements with the college, enabling students to make seamless transitions into their post-secondary careers. Also, many students in the school district have earned national recognition for their work in computing and other STEM-related fields.

- Tourism’s annual impact on the county’s economy exceeds $1 billion, a testament to the area’s lifestyle.

- The county’s millennial talent pool is nearly 50% greater than the national average, and its unemployment rate hovers at less than 4%.