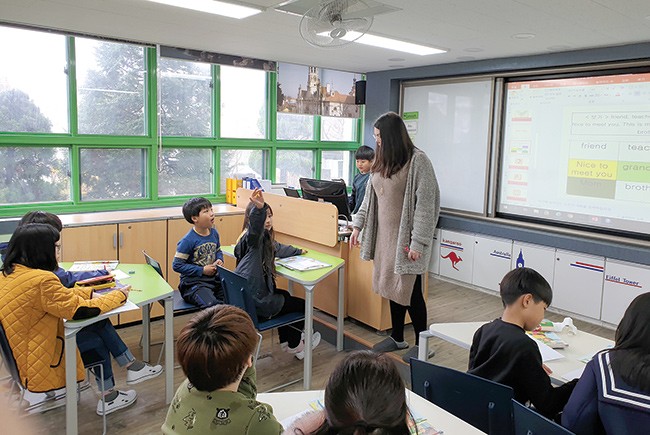 Many Florida teachers have participated in private and government programs that fund trips for teachers to countries like Brazil, China and others to observe, compare teaching practices and exchange ideas. Bradenton teacher Patrick Whelan has taken part in four trips as part of those programs. “There are teachers who do these all the time and teachers who don’t even know they exist,” he says.

South Korea: Successful — But at a Price

Students in South Korea are known for being successful and stressed out. They routinely outperform students in other OECD countries on standardized exams and have some of the highest educational attainment rates in the world. But many of them spend 12 hours or more a day in class, usually by attending private, after-school tutoring academies known as “hagwons.” Suicides are a national public health concern.

The same is true of teachers in South Korea, who are both well-paid and well-regarded. While the starting salary for a South Korean teacher is a little below the OECD average, the top of the scale is much higher; the top of the pay scale is 2.8 times the bottom, compared to an average ratio of 1.9 across the OECD countries.

“Teachers are held in high esteem here,” says Sarai Trinidad, a Miami native who has been teaching English in South Korea for nearly three years through a program designed to import English teachers from the United States.

A common complaint among American teachers is parents who blame the teacher for their children’s struggles. In South Korea, Trinidad says, “If there’s an issue with a kid, (parents will) usually side with the teacher and get on their kids about it.”

But it’s also a stressful job. Consider: A 2013 survey of teachers around the world conducted by OECD found that 66.3% of South Korean teachers would become teachers if they could decide again, significantly below the OECD average of 77.6%.

All teachers in South Korea, at public and private schools, are appraised each year, on both their performance (by school leaders and colleagues) and their specialty (by students, parents and colleagues). Just over 85% of South Korean schools say they use student assessment results to judge teachers’ effectiveness, compared to an OECD average of just over 50%.

Class sizes are quite a bit larger, as well, especially at the lower secondary level, where there are typically 32 students per class, compared to 23 across the OECD.

Jackie Joiner, a 26-year-old from Ormond Beach who is in her second year teaching English in South Korea, says she’s also been struck by how busy Korean teachers are. “It can be stressful for them,” she says.

Three years ago, in an effort to boost teacher morale, South Korea’s Ministry of Education enacted a leave of absence policy for teachers offering those who have taught for more than 10 years to take a leave for up to one year. The country has also piloted the use of Teacher Education Emotion Centers, according to OECD.

South Korea regulates the supply of primary school teachers, according to the American-based National Center on Education and the Economy. Teachers must be trained at one of 13 university programs around the country, which makes admissions very competitive. (Secondary school teachers, by contrast, can train in a broader variety of programs.) Every teacher must then pass what the NCEE describes as a “very competitive” entrance exam and then undergo pre-employment, post-employment and follow-up training.

Patrick Whelan's observation: “My impression about Japan is it’s one of the most technologically amazing countries in the world. Yet the schools have blackboards. The lowest-tech school in the United States is at about the level of these Japanese schools. Teaching is done very traditionally. As a teacher, it is amazing to go into a classroom and have everyone stand and bow to you. The respect is there. You are treated much more like a professional. Parents are deferential, in Korea even more so. … Japan is kind of rethinking its system and realizing their society is working too hard, putting in too much effort, and not seeing enough reward. They want to emulate American flexibility.”

Ex-pat Floridian Anastasia Letcher teaches in Japan. “My husband (also American and fluent in Japanese) and I met here in Gunma, and we are quite happy with the life we’ve made for ourselves. We both enjoy the pace of daily life in Gunma. On a practical note, I enjoy the benefits afforded to me by my working and living in Japan. I have health care. If my husband and I choose to have a child, I can take maternity leave and up to three years’ child-rearing leave (per child) and be guaranteed my current job back. Medical expenses are waived for children under 16 years old in Gunma.”

“The OECD puts the average Japanese teacher’s salary slightly lower than the U.S. average, but teacher salary varies greatly, so I don’t feel this is an accurate reflection,” she says. “My mother has been a teacher in Florida for over 20 years, and our salaries are not so different despite me only being in my fourth year of full-time teaching. Japanese teachers also get bonuses of a month and a half’s pay twice a year.”

Visiting a school in southeastern China in 2018, what struck Jennifer Rosoff, a dance teacher from Florida, was the size of the classes — 70 to 80 students to a class with one teacher — and how out of hand the students were. “How do you know 80 students are even learning?” she wondered. “How are you even assessing they’re learning?”

Rosoff visited China with 60 teachers from Tampa Bay. She worked with local teachers during China’s annual school break, doing activities like dance, art and physical education. It was similar to a U.S. summer camp, except it also provided the students with English-language education. The facilities were rundown, but Rosoff was told they were good for the region. Kids and teachers put in long school years — summer break is only about a month — and long days. School ran from 7 a.m. to 5 p.m. Teachers also worked six and sometimes seven days a week. “The teachers I talked to seemed very frustrated,” she says.

One reason: They had trouble managing their students. Rosoff observed that the most motivated students took the front rows so that they could absorb the lessons. Aside from them, there was a din through the rest of the room. Those in the back ran and threw things. “You would have to use a shouting voice,” she says. “I would have left my first year.” It led to a de facto system — perhaps a promising future for those in the front, a dim academic future for those in the rear and, when it came to special-needs learners, the neglect that special-needs American kids would have experienced a couple generations ago.

Rosoff and her fellow Americans on the first morning told their Chinese host teacher about classroom management techniques, such as raising a hand until all the students are quiet or calling, “class, class” and instructing the students to respond, “yes, yes” as a signal for everyone to be quiet. The Chinese teachers did the equivalent of an eye roll. But it worked. “They had never seen kids get quiet,” she says.

Rebecca Green Bew's observation: “Class sizes can go up to 100 kids. Here 20 kids can be a full room, but there the motivation toward academics was very intrinsic. The students were very driven. Teachers were going on periodic strikes because they weren’t getting the same type of cost-of-living increases that other civil servants were getting. The students were so upset with the government and their teachers that they went on a peaceful strike. They felt they were being deprived of their education. It made me rethink how I taught. Our students are so fixated about getting a grade, they lose track of the importance of learning. You’re not there to gain points; you’re there to gain knowledge.”

“It was just amazing to be there. It’s everything American schools are not," says Kerryane Monahan. "They have 60, 70 students in their classes that are in a thatched-roof, cinderblock structure with no power, and all the kids are quiet and looking straight ahead, and you’re like why do we struggle?

They don’t have any technology. It’s not like they have Babbel and Rosetta Stone. I was blown away by their English.

They’re highly motivated. I think they understand education is one of the only opportunities they have, in a fundamental way, to change the way they live. Some kids live five or 10 miles away. They sleep in the school yard at night. One day we had to close school because there were too many snakes in the roof.

Jacqueline Carrero's observation: “Students displayed genuine respect for their teachers. Students greeted their teachers in the beginning of class and sang/chanted to their teachers when the bell rang. It is part of their culture to have reverence for adults and seniors. The school campus was immaculate because students did not litter and picked up after themselves. I visited President Obama’s childhood elementary school. They have a photo of President Obama inside the school and a statue of him as a child displayed in the exterior courtyard.” — Mike Vogel

Maria Eugenia Zelaya's observation: “We teach only in our subject areas. They (teachers there) have to be class coordinators. They also have to be guidance counselors. Talking to them, they have a lot more responsibilities. They’re passionate. They care for their students. With very little resources, they do a lot.

In Brazil, Suzanne Banas visited a private school system of about a dozen schools, some in strip shopping centers, founded by teachers to focus on foreign-language training. “It was a big deal. These teachers wanted to be teachers. They don’t get paid very well. So teachers started a co-op school for foreign language. They all cared about creating a better school because the public school wasn’t good enough. You had to be a good enough teacher. Students had to want to come to the class. It was a whole different attitude of teachers. They wanted to soak up and learn things.”