An earlier start: Teaching in Israel 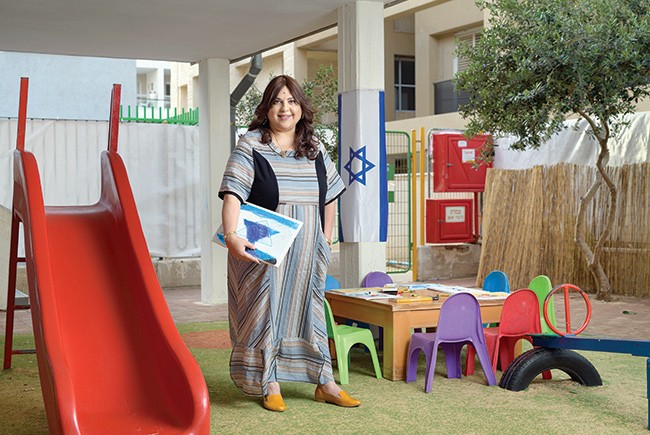 Shira Pendler decided to become a preschool teacher 22 years ago, after a short career as a dental assistant — a skill she had picked up during a mandatory stint in the Israeli Army. She was tired of working with dental patients and “wanted to do something that didn’t hurt people,” she says. “To me, working with children is more meaningful.”

She went back to school to get her bachelor’s degree, the minimum education requirement for teachers in Israel, and eventually got a master’s in education counseling.

Today, Pendler oversees a one-room public preschool with 35 students in Bat Yam, a coastal city just south of Tel Aviv. Her students will continue with her next year before moving on to elementary school. She has two assistants to help manage the class.

In 2012, Israel passed a law making preschool compulsory and free for children ages 3 and 4. Proponents of the law cited research suggesting that early childhood education leads to better life outcomes and pitched it as a way to close socioeconomic gaps.

As a result, public spending on early childhood education has increased significantly in the past decade, with tens of thousands of Israeli children enrolled in publicly funded preschool programs like Pendler’s. Accordingly, preschool teachers in Israel are in demand and make 15% more than the average high school teacher, according to the OECD.

Pendler says she earns nearly $47,000 a year before taxes and takes home about $2,500 a month — more than enough to make ends meet. “When I started teaching, it was hard to make a living,” she says. “I was a young mother with three small children, and I was divorced then, too. But today it’s wonderful.”

Pendler, whose children are now grown, says that if she had to do it over again, she’d still go into teaching. She says she’s treated like family by her students, who call her “mother,” and generally has the support of their parents. “Of course, some think they know better, but most are very grateful,” she says. Her goal is to have the students reading, or prepared to begin reading, by the time they leave preschool.

Since lowering Israel’s mandatory school age to 3, the Israeli government has certified hundreds of private preschools and built additional preschools to accommodate the influx of students. Overcrowding remains a common complaint, however. Pendler’s class size of 35 is typical for a public preschool program in Israel.

“Thirty-five kids, I think, is too much,” she says. “If I had 20 to 25 kids, I could listen more closely and go deeper with them to understand their feelings and thoughts better.”

“Every job has pluses and minuses,” she adds. “But if you truly love kids, it’s the most wonderful job.”

The average high school teacher with 15 years of experience makes $30,580 a year. Crowded classrooms are common, with an average elementary school class size of 27 students. Only Chile has a larger average class size among countries of the Organization for Economic Cooperation and Development.

The Program for International Student Assessment (PISA) is an international test administered every three years to high school students in about 70 countries. Overall, Israeli students rank below average in math, reading and science. The gap in performance between Israel’s weakest and strongest students is one of the largest among PISA-participating countries.

“The major challenge for Israel is how to raise the level of achievement for students coming from low socioeconomic backgrounds,” says Nachum Blass, principal researcher at the Jerusalem-based Taub Center, a social policy institute.

Historically, the educational achievements of Jewish students have exceeded those of Arab Israeli students, but the gaps are closing.