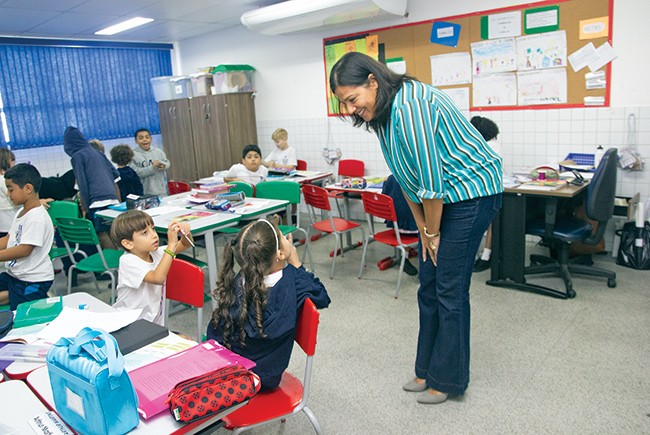 The country’s teacher corps is young and must work with big classes and widely varying work conditions depending on the part of the country.

Veteran teacher Lucimar Resende Rodrigues teaches English two days a week to sixth- through ninth-graders at a 250-student public school in Caeté, a small town about 300 miles north of Rio de Janeiro. The rest of the week she teaches children and adults at a private school that teaches English. Only 40% of Brazil’s teachers have full-time jobs. Many cobble a living by moonlighting at multiple schools or taking other jobs.

Rodrigues began working at the public school this year to add to her retirement savings. “I also need some challenge in life. I know I’m capable of more,” she says. Portuguese, she says, has two verbs for what teachers do — one is akin to “giving” a lecture; the other is teaching so that students learn, she says. “Some teachers present a subject. They make students copy, but they don’t really teach. I believe teachers are born teachers,” Rodrigues says.

“I am able to support myself on my salary,” she says. “I can take vacations abroad once a year, afford a popular car, a good wardrobe. I can sometimes go to expensive restaurants and to good shows.”

Pedro Paulo Coelho’s path to teaching began as a teenager while working at a bank. Concerned about income inequality, he volunteered to help low-income kids prepare for the nation’s high-stakes university admission exams. “I loved it,” he says.

Coelho went into teaching. Brazil’s teachers are young. Only 20% of them are 50 or older; the developed world average is 35%. Coincidentally, four teachers we interviewed started as Coelho did — essentially straight out of high school, with university degrees earned later. Coelho earned his economics degree in 2013 and a geography degree in 2015. Coelho started teaching at 22; now, at 29, he teaches mostly geography at a 2,500-student, São Paulo private middle and high school. As is common in Brazil, the school runs in shifts, and classes are large — 35 to 40 students. He says talks with students about mutual respect enable the large classes to function.

He clearly enjoys working with youth. He’s excited that the school let him develop elective courses, a rarity in Brazil. By combining their salaries, he and his wife, a university professor, are able to raise their daughter in a good São Paulo neighborhood and travel. “This is not the reality of the other teachers in Brazil,” he says. “We live in a country very, very unequal.”

Valeria Ozorio de Oliveira, 32, became a teacher through a program that extended her high school education by one year to add teacher training. She later picked up a university degree in English and Portuguese and one in teaching. She teaches kindergarten in a São Paulo “unified education center,” a combined public elementary school and community center, rare in Brazil, that has a swimming pool, library and cinema.

She says she and her husband “bit by bit” have been able to afford a car, a home and travel — “a comfortable life.” But, she adds, “I struggled years to be where I am today.”

Classrooms are crowded. Brazil needs more and better school facilities, she says, along with mental health support for teachers in trying times, plus quality toys, paint and paper for students. She has seen discouraged teachers switch careers and feels society doesn’t recognize the value of teachers. “I think that the salary of a teacher in Brazil is still far below what we should earn,” she says. Average starting teacher salary, adjusting for currency and local purchasing power, is a third less than the developed world average, according to the Organization for Economic Cooperation and Development. Upper secondary school teachers — typically the highest paid teachers in any country — earn $24,100 annually, well below the developed world average.

“Despite the difficulties we face, I believe that education can transform the world and people,” she says. “And without teachers, this will not be possible.”

Teachers inspired Juliana Seidner’s career. One in particular “had so much fun with us. Her courses were so alive and full of energy,” Seidner says. “It looked fun. I like kids.”

But when asked whether she would recommend teaching, Seidner, 36, a lifelong Rio de Janeiro resident and a teacher since she was 19, answers instantly. “No, to be honest, I wouldn’t,” she says. “I would say, run, run for your life.”

She received her teaching certificate just out of high school and, while teaching, later earned additional degrees for Portuguese and English. To make ends meet, she works at both a public and private school. Her public school classes have 25 to 30 students. In Brazil, according to the OECD, average class sizes are 23 in elementary school and 27 in lower secondary.

The World Bank says Brazil spends an above-average share of its government budget on education. But it’s playing catch-up. A UN report says the mean years of schooling for someone over 25 is just shy of eight.

Discipline “is a big issue here,” Seidner says. Long hours, discipline problems and low pay sometimes sap her motivation. But she reconsiders her earlier response about a teaching career. “I would say, listen, what are your expectations? Is the person really enthusiastic about becoming a teacher?” Seidner says. “If I had the chance, I wouldn’t choose this again. I still love it, but maybe I would try to go in a different direction.”

Ana Paula Giraux Leitão, 52, is the principal of a campus of one of Brazil’s most extraordinary schools, Colégio Pedro II, a historic school of 14 campuses in Rio de Janeiro run by the federal government — unusual in Brazil. She got the job when fellow teachers, staff and student families elected her to the post.

The school is much in demand by Rio parents. Teachers must pass exams to get hired. Most have master’s and doctorates. Her 480-student campus is for elementary school, ages 6 to 12. First-year students are 20 to a class. After that, it’s 25 each. It caters to students with special needs. As part of the federal government, “Colégio Pedro II’s teachers are privileged in comparison to other Brazilian” teachers, she says.

“Work with education is challenging but very rewarding, and our achievements are bigger and more important than defeats,” Leitão says.

Brazil’s 30 million students are educated in a highly decentralized system in which states and municipalities finance primary and lower secondary schools and municipalities run them. Upper secondary schools are run by the states. Because of crowding, many schools run in shifts. Private schools, especially for learning a foreign language, are prevalent. There also are co-ops owned by teachers, schools run by the military and federal government schools. Historically, teachers were required to have only a high school degree, but the national government has called for teachers to have at least a bachelor’s degree, as is required of secondary school teachers.

Teachers in Brazil are more likely than peers globally to pay for their own professional development. Only 40% work full time — half the developed world average. Brazil teachers are younger than average. The average salary in Brazil for teachers from age 25 to retirement ranges from $22,000 for pre-primary to $24,100 in upper secondary. The developed world averages are $36,900 to $45,900.

Class sizes have been decreasing but still average 23 students in primary and 27 in lower secondary, both above developed world averages of 21 and 23. Brazilian teachers report more discipline problems and spending more time maintaining order than their peers globally.

Read more in the June issue.