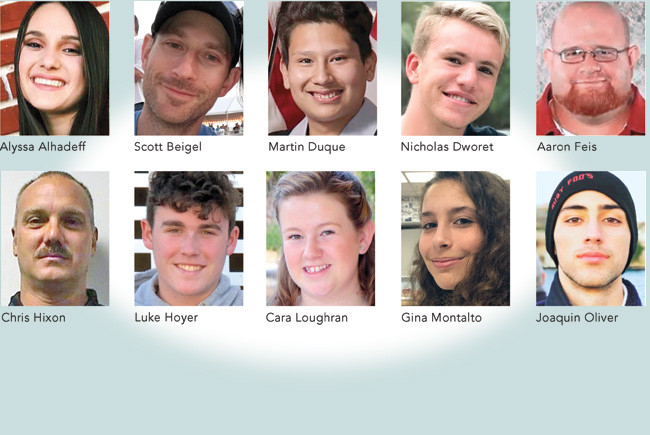 On Feb. 14, 2018, a mass shooting at Marjory Stoneman Douglas High School in Parkland took the lives of 17 students and staff and wounded 17 others. They were sons and daughters, brothers and sisters, and fathers. Some spent their last moments shielding schoolmates from gunfire. Their number included band members, a dancer, a pianist and National Merit semifinalist. Three were members of the school JROTC. One enjoyed firing AR-15s. All posthumously received JROTC heroism awards. One, who wanted to attend the U.S. Military Academy at West Point, was accepted posthumously. Three of the dead were staffers — the athletic director, a wrestling coach and a geography teacher and cross country coach, who sacrificed themselves for students. All three jointly were honored with the national best coach award at the ESPY awards.

In the wake of the shooting, children and adults did more than grieve. Student and parent activists with views across the gun control and gun-owner rights spectrum met in public debate — stridently, but civilly — with others locally, statewide and nationally and involved themselves in political races. Nationally, after Parkland, Congress passed the bipartisan STOP School Violence Act that provided money for assessing threats and preventing violence. Broward was one of the first grant recipients. In Florida, the Legislature passed the bipartisan Marjory Stoneman Douglas High School Public Safety Act, which, among other things, raised the age for gun ownership in Florida to 21. It also required a security officer at every school and provided funds for more mental health counseling and security infrastructure at schools. And it created a process by which law enforcement can prevent people considered high risk of harming themselves or others from purchasing or possessing firearms. A commission was formed to study the incident, including the failure of law enforcement and the school system to intervene before the shooting despite warning signs from the shooter, and the failed school security response during the shooting itself.

Want to read more from the December issue?