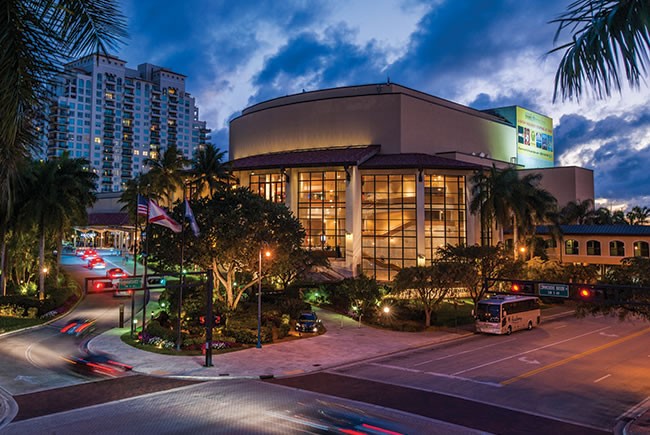 At the other end of downtown is the NSU Art Museum Fort Lauderdale. The facility recently closed out the successful exhibit by artist Frank Stella. So enraptured was the business community with the Stella exhibit that the nearby Four Seasons Hotel celebrated it in a full-page ad in the New York Times Sunday Magazine.

The two institutions are the anchors of downtown Fort Lauderdale’s popular 22-block Riverwalk Arts & Entertainment District. They’re also the centerpieces of an array of arts and cultural institutions reaching every community in the county.

The arts are big business in Broward County. Some $414.2 million was spent countywide on arts, arts-related tourism and ancillary services, according to the 2017 Arts & Economic Prosperity 5 study from Americans for the Arts. Arts and cultural organizations provide 11,078 full-time jobs and drive $40.1 million in local and state government revenue.

Catching the wave, developers are turning buildings and restaurants into canvasses. The popular YOLO Restaurant on Las Olas Boulevard hosts pop-up art installations through a partnership with a local arts organization. Nearby, a planned 218-room Hilton Hotel will feature a prominent architectural glass wrap and mural created by local artists integrated into a popular walking path through FAT Village (Flagler, Arts, Technology), a 300-acre enclave that is home to galleries, creative arts, theater, residential and office space.

From the downtown corridor, art touches every corner of the community, including the airport. Fort Lauderdale-Hollywood International Airport boasts 63 works. Art Fair Fort Lauderdale presents paintings, pieces, artist talks and guest interactions over four days to put Fort Lauderdale “on the art world map as a premier location to view, interact with and purchase art,” says Andrew Martineau, co-founder and director of Art Fort Lauderdale: The Art Fair on the Water.

This private- and public-sector investment across Broward County and South Florida drives synergies for deeper relationships. This season, NSU Art Museum exhibitions of paintings by the French Impressionist Pierre-Auguste Renoir and American realist William J. Glackens will coincide with the Broward Center’s presentation of “Hamilton.” Visitors to the Florida Grand Opera’s production of “Frida” in March 2019 will be able to enjoy works by Frida Kahlo and her husband Diego Rivera in its permanent collection.

Greater Fort Lauderdale is central to a growing arts region, as evidenced by its location equidistant from Art Basel Miami Beach, the Wynwood district to the south and the Norton Museum in West Palm Beach, which recently underwent a $100-million expansion.

“The cumulative effect of these cross-promotions will reinforce the perception that Greater Fort Lauderdale is experiencing a cultural renaissance,” says Bonnie Clearwater, the NSU Art Museum’s director and chief curator.

“The arts have played a major role in attracting new companies to our area,” adds Jarett Levan, president of BBX Capital and founder of Business for the Arts Broward, a non-profit organization of business leaders who advocate for arts and culture. “Arts and culture in Broward County has evolved and grown tremendously over the last decade, and our area has become a cultural gem, providing opportunities to enjoy a wonderful quality of life beyond the office and the classroom.”