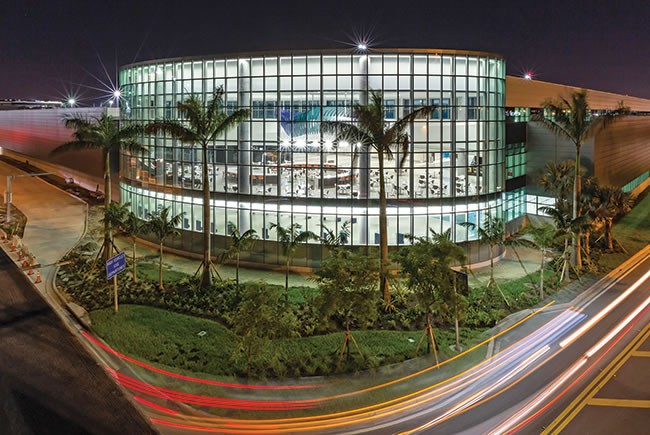 A $2.3-billion expansion program at FLL, the nation’s fastest-growing airport, has included lengthening the south runway to 8,000 feet, the addition of a concourse and U.S. Customs Inspection Facility and proposed plans for up to 95 gates and a new intermodal facility.

Located less than two miles from Port Everglades, the airport is a vital link to the county’s cruise industry.

The county’s seaport is known globally as the Cruise Capital of the World. But that tells only half the story. The port is a critical link in regional shipping.

“Prior to the first commercial ship arriving through our entrance channel 90 years ago, Broward County’s founders had the vision and foresight to recognize that the port’s greatest strength would be the economic opportunity that it provides to our community,” says Steven Cernak, Port Everglades director and chief executive.

Some $1.6 billion in expansion projects will position the port for next generation cruising and shipping and create 143,000 jobs beyond 2030.

• A channel deepening project, along with the lengthening of the Southport turning notch from 900 to 2,400 feet and the addition of new gantry cranes along five new berths, to accommodate “Panamax” vessels arriving via the expanded Panama Canal.

• Redevelopment of petroleum off-loading facilities to enhance the port’s role as a major seaport for receiving petroleum products for all of South Florida, including jet fuel for four international airports.

Port Everglades cruise traffic continues to sail full steam ahead. New passenger terminals and the arrival of some of the world’s largest cruise ships will increase traffic from 3.8 million passengers in 2016 to a forecast 5.6 million passengers a year by 2033. In all, the port serves nine cruise lines and 39 cruise ships. Its ships and growth plans include:

• A complete expansion and remodeling — with technology, art installations and novel design — of Terminal 25 for the November 2018 arrival of Celebrity Cruises Edge; and a transformation of Terminal 2 for ships sailed by Carnival Corporation as the first facility equipped for its new Ocean Medallion interactive wearable technology.

“Port Everglades has been a very important partner with Celebrity for years,” says Celebrity President Lisa Lutoff-Perlo. “They’re very welcoming, and with airlift into Fort Lauderdale- Hollywood International Airport, we have our home there.”

The $72-million, 43.4-acre near-dock Intermodal Container Transfer Facility owned and operated by Florida East Coast Railway facilitates transfer of containers from the port’s containerized cargo terminals to rail or truck. A $42.5-million overpass allows vehicles to travel unimpeded over the rail tracks and connect with I-595, I-95, I-75 and Florida’s Turnpike.

When it debuted in early 2018, Brightline became Florida’s only high-speed passenger rail service connecting Fort Lauderdale with Miami and West Palm Beach — and a much-needed addition for area commuters. Some called it a “game-changer.”

Passengers traveling to area business centers are spirited non-stop from Fort Lauderdale to downtown Miami or West Palm Beach in about 30 to 45 minutes. A planned 235-mile leg to Orlando International Airport will take less than three hours to travel.

As developers invest millions in property and build hotels and housing near its stations, some residents are being drawn east to neighborhoods like FAT Village arts district, Flagler Village, Progresso Village and downtown Fort Lauderdale — and those to the west are finding improved commuter options. Brightline quickly became a key link in a regional “multi-modal” transportation network.