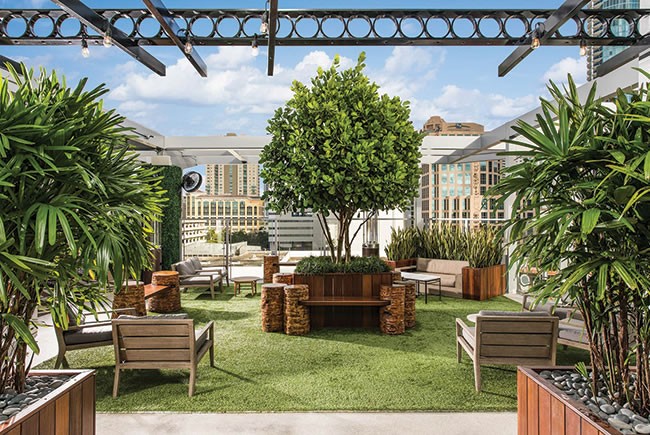 A stone’s throw from Fort Lauderdale-Hollywood International Airport, the $800-million mixed-use development Dania Pointe is rising on 102 acres and along 1,600 feet of Interstate 95 frontage where an amusement park once stood. The planned “central business district” will feature almost 800,000 square feet of retail and restaurant space, Class A offices, Marriott-flagged hotels, 400 luxury apartments and public event space. Phase 1 is slated to open this year.

Almost 15 miles due west, Metropica is a $1.5-billion, 65-acre mixed-use and master-planned community on a wedge of property adjoining the Sawgrass Mills Mall in Sunrise. Once completed, it will bring 4 million square feet of developed space, including 2,250 residential units, more than 1.1 million square feet of stores and offices, a hotel, a park and even a beach club.

Also in Sunrise, the county is weighing plans for 140 acres beside the BB&T Center, home of the Florida Panthers NHL franchise. The Urban Land Institute has suggested apartments, hotels, entertainment venues and office space for what now is parking and undeveloped wetlands.

Between the Atlantic and the Everglades, infill is capitalizing on moribund parcels. Developer 13th Floor Investments has transformed three former golf courses into single-family and townhome communities in the bedroom city of Tamarac, which features platinum and concierge permitting to expedite project review. Tapping a similar development strategy, Butters Realty & Management has teed up a number of “opportunistic” projects, including the transformation of golf courses and other parcels into millions of square feet of industrial, corporate and warehouse parks.

The downtown Fort Lauderdale corridor to many represents some of the strongest growth. Venerable developer Stiles, which was a pioneer in area corporate parks, partnered with Broward College to build a new downtown tower. Developers Stiles, Related Group, Morgan Group, Merrimac Ventures and others have built or are planning a projected 5,000 condominium and hotel units in the 300-acre Flagler Village, a once-neglected warehouse and residential district reborn into Fort Lauderdale’s trendiest lifestyle area.

Co-founder and CEO Tim Petrillo is bullish on the possibilities. “This vibrancy will allow the hospitality community to take bigger risks, which will ultimately translate into a wider variety of restaurant choices and a trendier, more energetic nighttime economy.”

Fort Lauderdale presents a significant discount compared to Miami Beach, according to Colliers International Fort Lauderdale Market Pulse for first quarter 2018. The city jumped to sixth place in the Top 10 U.S. Markets To Watch. This makes the county a key market for developers looking to serve its 1.9 million residents and newcomers looking for an alternative to other regional destinations, says Carlos Rosso, condominium development division president of Related Group. Moreover, proximity to the airport and commuter options like Brightline have piqued the interest of companies and executives relocating from the Northeast.

“Fort Lauderdale continues to evolve with the opening of new businesses, hotels and residential projects,” says Rosso, whose company has delivered luxury projects Icon Las Olas, Auberge Beach Residences & Spa Fort Lauderdale and Hyde Beach House in Hallandale Beach. “Companies are turning to the area based on its price value appeal from both a business and residential cost perspective.”

With construction cranes and other heavy equipment common sights countywide, the area — especially downtown Fort Lauderdale — has taken on a “new, younger vibe,” says Mike Weymouth, president of Las Olas Company and the fourth family member to lead the largest property owner on the boulevard.

“When you walk through the district, it’s immediately clear the area will continue to grow and evolve,” he says. “It gives me great confidence to see local land owners, business owners and government officials working together to help Fort Lauderdale reach its true potential, while retaining the unique personality that’s defined it for so long.