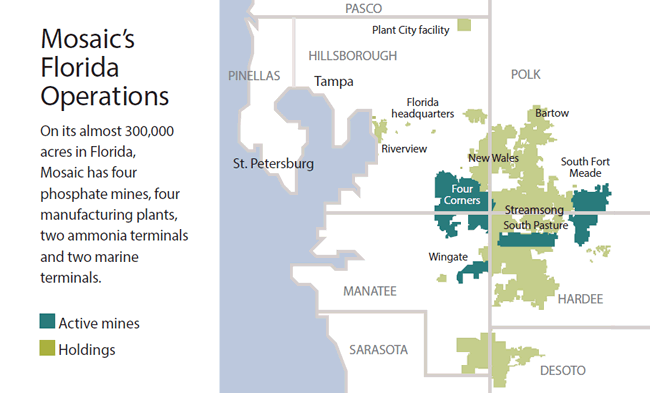 An even bigger complication for the company is clay. In phosphate mining, giant draglines, with buckets big enough to hold a truck, first scrape away a top layer of soil, known as the “overburden,” that can be as deep as 40 feet. This exposes the “matrix” — a layer of sediment containing sand, clay and phosphate rock — which is scooped out, then mixed with water to create a slurry and piped away to a plant where it can be separated. The phosphate rock gets shipped to a factory where it is turned into fertilizer. The sand “tailings” are used to refill the canyons dug by the draglines. The clay — which, because it has been mixed with water, takes up far more space than it had in the ground — is dumped into what are known as “clay settling areas.”

Clay settling areas are huge — as big as 80 acres and surrounded by berms as tall as 60 feet. They account for an estimated 40% of all previously mined land.

And they take decades to stabilize. Even after the surface level clay has dried and crusted, the lower level clay remains wet and unstable. Bill Lambert, executive director of the Hardee County Economic Development Council, likens a clay settling area to “a bucket of drywall mud.” Even if the surface is hard, the rest of it is soft and unsuitable for any kind of intense development.

Clay has even posed a challenge at Streamsong. As part of the third golf course it opened this year, Mosaic built a second clubhouse with another restaurant. Unlike the first clubhouse — which was built on sand and is three stories tall — the second clubhouse was built on a sand-clay mix. That meant Mosaic had to build a much smaller, lighter building; the new clubhouse is only a single story to avoid the need for heavy elevators and stairwells.

Knowing that clay settling areas are likely to be unsuitable for development, the company today is experimenting with different types of crops that could be grown on them. Mosaic says it is evaluating whether to pursue “commercial-scale production” of a number of crops, including pongamia, olives, hops and cottonwood, or possibly new citrus groves to replace others destroyed by greening.

The company says eucalyptus trees — for use in the mulch market — have proven especially promising. “Our trial plantings have shown that the trees grow at a tremendous rate in the clay soils,” a company spokesman says, adding that Mosaic intends to start planting “significant acreage” of eucalyptus this year.

Ultimately, Mosaic says the future of much of its land likely is in agricultural and industrial development, rather than housing. “We do not currently have a master land-use plan but are in the process of developing a plan to extract the greatest value possible from our postmined lands,” Mosaic spokesman Russell Schweiss says. “Right now, most of the reclaimed land is in cattle lease. We’re evaluating whether there are alternative uses that provide better returns for our investors over time.

Of course, the company’s plans could easily change. A few years ago, Mosaic was among the Central Florida landowners behind a group pushing for the controversial Heartland Parkway — a proposed toll road that would have extended from near the Polk/Osceola line to the southwest coast around Fort Myers or Naples — that would have opened up millions of acres of agricultural land to development.

The Heartland Parkway plan is now dormant, though the Florida Department of Transportation is again moving forward with what would have been the first leg of the parkway — a segment in Polk County that the agency says is now a standalone project

Sunnarborg says Mosaic intends to stay involved in debates about future highway corridors in the region.

Meanwhile, Streamsong continues to grow. So far, only about 2,300 acres of the 16,000-acre property have been developed. Sunnarborg says additions could include more courses and luxury vacation villas.

Then the company will have to decide whether to sell it.

“We want to make sure the business is stabilized,” Sunnarborg says. “Someday, we might let it go. Right now, it’s still maturing.”

Mosaic, the last big phosphate mining company in Florida, continues to push farther south into the state’s heartland — despite opposition from the environmental community.

After years of legal battles — including an injunction that prompted the company to shut down some operations and temporarily lay off workers — Mosaic finally broached the Polk County-Hardee County line in 2012. The breakthrough came when the company struck a deal with a trio of environmental groups in southwest Florida, which agreed to drop their opposition to Mosaic’s plan to expand its South Fort Meade mine in exchange for preserving 130 acres of otherwise mining eligible land, donating nearly 4,200-acre ranch for conservation and cash to cover startup costs to operate the ranch as a state park. The settlement cost Mosaic $13 million.

Further expansions have followed. In March 2014, Mosaic acquired the phosphate assets of CF Industries, which included the 25,000-acre South Pasture mine and a plant in Hardee County. And in November 2016, the U.S. Army Corps of Engineers approved Mosaic’s request to expand that mine by roughly 7,500 acres. Environmental groups have sued to block the plan.

The company is also working on plans to develop two new mines: The 22,000-acre Ona mine, also in Hardee County, and the 18,000-acre DeSoto mine, in DeSoto County.