Orlando envisions a sports-theme plan under an I-4 overpass 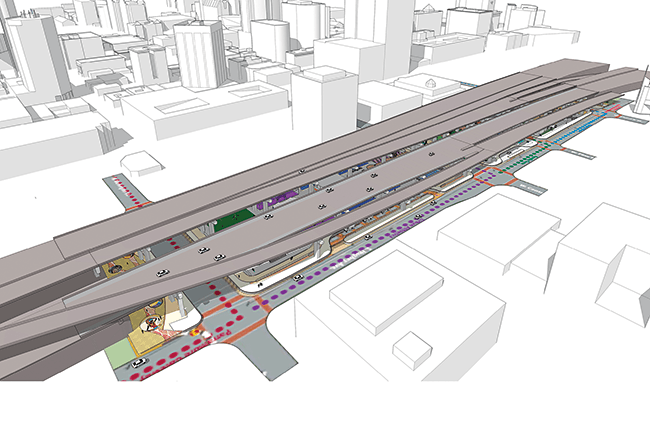 I-4 cuts an unsightly gash through downtown Orlando, creating an elevated obstacle that separates the central business and nightlife district from the city’s sports venues, leaving space beneath the roadway that is relegated mostly to surface parking. But now, with the highway in the midst of a nearly seven-year reconstruction, city leaders are working on a new vision for that space — a five-block-long, urban park dubbed the “Under i.” New plans, unveiled in October, call for a collection of community assets, including soccer fields, basketball courts and a ¼-mile running track; playground and splash pad; a skateboard plaza; and flexible entertainment and market spaces. Groundbreaking is expected to happen in 2021, around the time the I-4 reconstruction is complete.

In other business news...

Research by Oxford University professors suggests that, in the future, many low-wage service occupations have a higher-thanaverage probability of being automated. The most likelyto- be-automated jobs include those in office and administrative support, food preparation and service, and sales and related positions.

The Institute for Spatial Economic Analysis at the University of Redlands in California combined the Oxford research with U.S. employment data from the Bureau of Labor Statistics to rank regions in the U.S. based on the vulnerability of their jobs to automation.

The results weren’t good news for Orlando, where the dominant tourism industry creates plenty of jobs, but many of the kind that Oxford found are likely to be automated. The ISEA analysis found more than 61% of the jobs in the metro region are automatable, making Orlando the seventh-most vulnerable city in the nation among 100 metro areas around the country with more than 250,000 jobs.

ALTAMONTE SPRINGS — The city launched its own municipal electric utility.

CENTRAL FLORIDA — HCA Healthcare’s north Florida division will open three free-standing emergency rooms around the region over the next year, including two in Orlando and a third in Seminole County. HCA will also add two urgent-care clinics in Seminole County and two in Orange County.

LAKE COUNTY — The county school board adopted a policy requiring students to obtain parental permission before joining a student group. The new policy emerged after a court ruled the school district could not bar gaystraight alliance clubs in its middle schools.

MELBOURNE — Porter Airlines will start seasonal service between Orlando Melbourne International Airport and the Ontario cities of Ottawa and Windsor.

ORLANDO — A 150,000-sq.-ft. Andretti Indoor Karting & Games attraction opened on the International Drive tourist strip. Accounting firm Ernst & Young plans to create 150 jobs over the next five years in a new downtown office. Orlando ranks third in the country in the number of human trafficking calls per capita, according to a ranking of the 100 most populous cities in the nation compiled by the National Human Trafficking Hotline. Universal Orlando plans to hire another 3,000 full-time, part-time and seasonal workers. The Pirate’s Dinner Adventure attraction laid off 206 workers after the facility was badly damaged by Hurricane Irma. Hyperloop One, the high-speed rail company conceived by Elon Musk, announced that Orlando-to-Miami was one of 10 routes nationwide that has advanced through an initial review. Orlando International Airport was the highest rated “mega airport” in the country for overall satisfaction by JD Power.