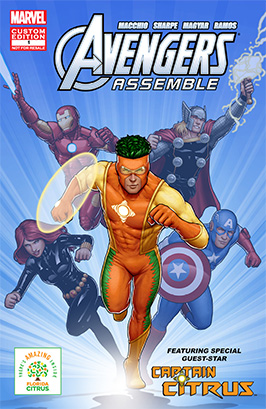 Citrus Diseases are Costly to the State

A number of diseases affect Florida citrus crops. Perhaps the most impactful is Citrus Greening, a disease caused by bacterium Candidatus Liberibacter asiaticus, which causes a phenomenon known as "premature fruit drop." Since its introduction to Florida in 2005, the disease has been costly to the Sunshine State. A 2012 University of Florida (UF) report estimated that citrus greening cost the Florida economy approximately $3.63 billion in lost revenues and 6,611 jobs over five seasons (2006-07 through 2010-11) due to the decrease in orange juice production.6 While the Agriculture, Forestry, and Fisheries sector is by far the most heavily impacted, negative effects are felt by the Government, Health and Social Services, and Retail Trade sectors as well. The UF estimates do not include the impacts on the fresh orange market, or the impact of the disease on other crops such as grapefruits, making the impact of the disease much more serious. 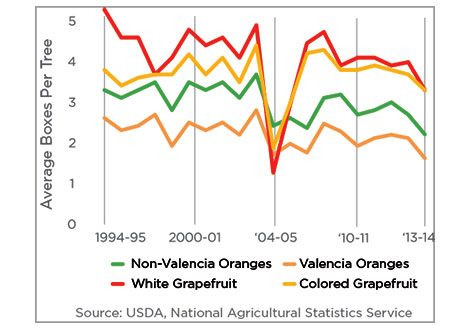 The other disease doing substantial damage to Florida citrus crops is Citrus Canker, which causes lesions on the leaves, stems, and fruit of citrus trees, ultimately leading to reduced output and higher cost of production. The public and private sectors are both affected by the cost of programs looking to eradicate Citrus Canker. One particularly costly campaign to both sectors was a decade-long, ultimately unsuccessful fight against Citrus Canker in South Florida. More than 60,000 trees were felled during the campaign,7 as the state had declared that any tree within 1,900 feet of an infected tree had to be destroyed. As a result, approximately 26,000 homeowners in Palm Beach County alone lost citrus trees,8and have yet to be compensated for their loss by the state.

According to the Florida Department of Agriculture and Consumer Services, more than 60 percent of the state’s citrus production is concentrated in 5 counties: Polk, Hendry, Highlands, DeSoto, and Hardee. In the 2013-14 season, Polk County produced 4.7 million fewer boxes than the previous season, and Sarasota County experienced the largest loss by percentage, with 46 percent less boxes than the previous season.

For several of these counties, citrus is one of the biggest economic drivers, and is an important source of local tax revenues. Citrus production in the Central Florida region alone has a total employment impact of 40,149 jobs. This is three times larger than the employment impact that the industry has in South Florida and almost five times the impact it has in the Indian River region.9

Another UF report on Polk County’s economy shows that the manufacturing and distribution industries in the county are geographically dependent on its agricultural production, which is dominated by citrus.10

Millions of public dollars have been allocated for combating Citrus Greening in Florida. In February 2015, UF’s Institute of Food and Agricultural Sciences reported receiving $13.4 million in federal funds to find a cure.11 Furthermore, USDA Agriculture Secretary Tom Vilsack recently announced that the 2014 Farm Bill makes available $23 million from the USDA for research and extension projects for producers battling against Citrus Greening.12

Several scientists in Florida have been working on finding a cure for Greening and Canker. Recently, University of Central Florida (UCF) researchers have been using a federal grant to develop a bactericide called Zinkicide. The drug has been sprayed on citrus trees in St. Lucie County and in UF’s Citrus Research and Education Center, has been tested on Citrus Greening, and has shown promising results in fighting Citrus Canker.13

Penicillin injections have also been showing promising results, as sick trees injected with this treatment were almost back to normal about 19 days after the injections. This treatment is yet to be approved by the U.S. Food and Drug Administration (FDA), particularly because traces of the drug in the fruit may cause reactions in those allergic to penicillin.14 There have also been other treatments tested, including steam-generated heat therapy and antimicrobial treatment.15

Citrus continues to be a very important component of the Florida economy, as the industry supports thousands of jobs, and is valued at more than $10 billion; however, citrus diseases have been threatening the health of the industry. The fight against citrus diseases has been costly to private sector producers, the state, and the federal government. Thankfully, several funds have been created to aid research, and promising new techniques are being developed in Florida universities to combat the disease. Additionally, Florida Department of Agriculture and Consumer Services Commissioner Adam Putnam has requested increased funding from the state and federal governments to help combat these and other citrus diseases.