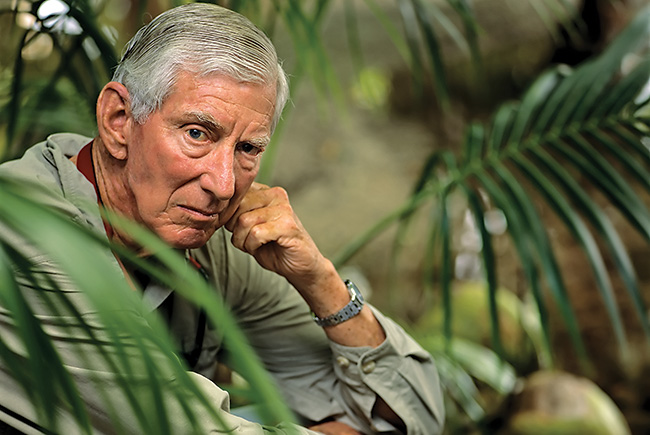 "I feel for the farmers right now. This is the one time I would give priority to agriculture. It's more important that they have water than I have water"

» The Indian River was literally alive, bluegill, pompano, ladyfish, channel bass, jack crevalle. This was the highlight of my life. I used to wade in the river as a young teenager for hours without sneakers on, and my feet would get cut with oyster shells, and my father would have a cat over it.

» My father neither fished nor shot. But my parents saw in this youth this mad passion, and they did everything in their power to encourage it. My bedroom was always the furthest away from the other children so that I wouldn’t disturb anyone in the house when I got up to go fishing at 6 o’clock in the morning.

» I came out of military intelligence in the fall of ’59 and returned to Florida to run the club (Jupiter Island Club). I resumed my love affair with Florida.

» In those days we’d close the club in April, the island would shut down, and I would have these wonderful months where I drove endlessly across the state. I went from the Panhandle to the Keys. I continued fishing, and I began to read about people who were terribly concerned with the destruction of habitat and natural resources. I began to just call them and say, ‘I’d like to meet you.’ I fell under the spell of Arthur Marshall.

» Everyone wanted to know where Claude Kirk was election night. He was sitting right there where you’re sitting, having a hefty brandy and a cigar. At about 9 o’clock someone said, ‘Don’t you want to check the election results?’ And he said: ‘I won. Why do you need to check?’

» You have to remember that every bit of sewage from Palm Beach to Miami went raw into the ocean every day. Only Tampa had a primary sewage treatment plant. All the west coast sewage went into the Gulf raw.

» Claude turned out to be a populist and saw evil everywhere, and you could convince him of evil. Anybody who thinks Claude Kirk didn’t believe is wrong — he did believe. We wouldn’t have Biscayne National Park without Claude Kirk.

» We had fervor; we had ardor; we had 100 years of neglect. We had raw sewage running in the streets, and it was a crisis. But I don’t think we had the science. Today, we can convince decision-makers to make major environmental gains, but it must be based on sound science.

» Reubin Askew called me in after winning the election, I thought to say ‘sayonara.’ Instead he said, ‘Will you give me a minimum of two more years of your life?’ He’s a man of enormous force. I could see that he was going to make a great governor, to make a better Florida. The water management districts alone were one of the greatest changes.

» I took the blame, but it was my mother who waved at a contractor and said, ‘Why can’t we prune the mangroves to have a view of the Indian River?’ We proved that making the mangrove grow horizontally produced the same number of leaves and the same number of benefits. When you make a mangrove an enemy of people instead of a friend of people, you are making a huge environmental error. People had learned to use pesticides and do evil things in the middle of the night to get rid of mangroves.

» The water management districts have digressed over the past eight years because of the Bush appointments.

» At the time of their creations in 1971, John DeGrove and I argued that the water management district boards should be appointed. Kirk taught me that the problem of the Democratic government he took on was there was no accountability. Everything was run by the dwarfs. We wanted to hold the governor responsible for the quality and the performance of his appointees — on the regional planning councils and the water management districts. I still believe that.

» To have the senior vice president of U.S. Sugar serving on the board of the South Florida Water Management District is an outrage. And voting on issues that impact the financial aspects of U.S. Sugar is beyond belief.

» Graham appointing me to the water management district board was as bold a move as Gov. Crist appointing Shannon Estenoz to the board. I’m so encouraged about his appointments at DEP and DCA. I’m jumping up and down.

» We’ve got to have a much stricter system on drainage. I am dumbfounded that the counties, the water management district and the corps would have permitted some of the projects we’re seeing on the western side of the Everglades.

» Al Gore lost it all on the Homestead airport. I know that. A whole bunch of uncommitted people in Homestead, many of them Democrats, were infuriated by his refusal to protect Everglades National Park and Biscayne National Park.

» The creativity of man is so great. I remain optimistic that man will not destroy his Mother Earth.