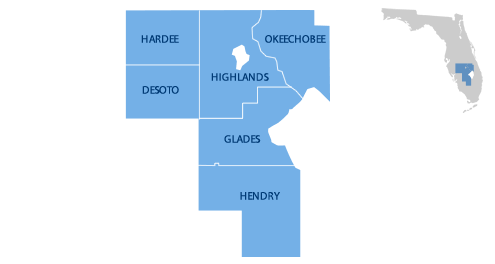 South Central is an anomaly among Florida’s eight economic development regions. It has neither a saltwater coastline nor a theme park. But what it does have are wide open spaces and an enviable geographic location. Three interstate highways and the Okeechobee Waterway, a system of navigable rivers and canals linking Florida’s east and west coasts through Lake Okeechobee, put nearly 90% of the state’s entire population within a 150-mile radius. This is Florida’s heartland where citrus growers and cattle ranchers do business alongside manufacturing facilities and solar power plants. To site a company here is to enjoy the best of two worlds — backyard picnics and porch swings close at hand, with beaches and big, bustling cities just a short drive away.

In early 2018, FPL unveiled a solar-plus-storage system at the Citrus Solar Energy Center. For the Citrus plant, this has meant a potential increase of more than 500,000 kilowatt-hours delivered to the electric grid per year and increased capacity to store energy for dispatch to the grid at a later time.

Keeping with its goal of 14 universal solar power plants in operation across the state by 2023, Duke Energy Florida’s 45-megawatt Lake Placid Solar Power Plant began operations in Highlands County in December 2019. In August 2020, Duke announced plans to build an 18-megawatt lithium battery storage site at the Lake Placid plant to increase energy security and enable the integration of more renewables. The 74.9-megawatt Charlie Creek Solar Plant on 610 acres in Hardee County is due to be completed in late 2021.