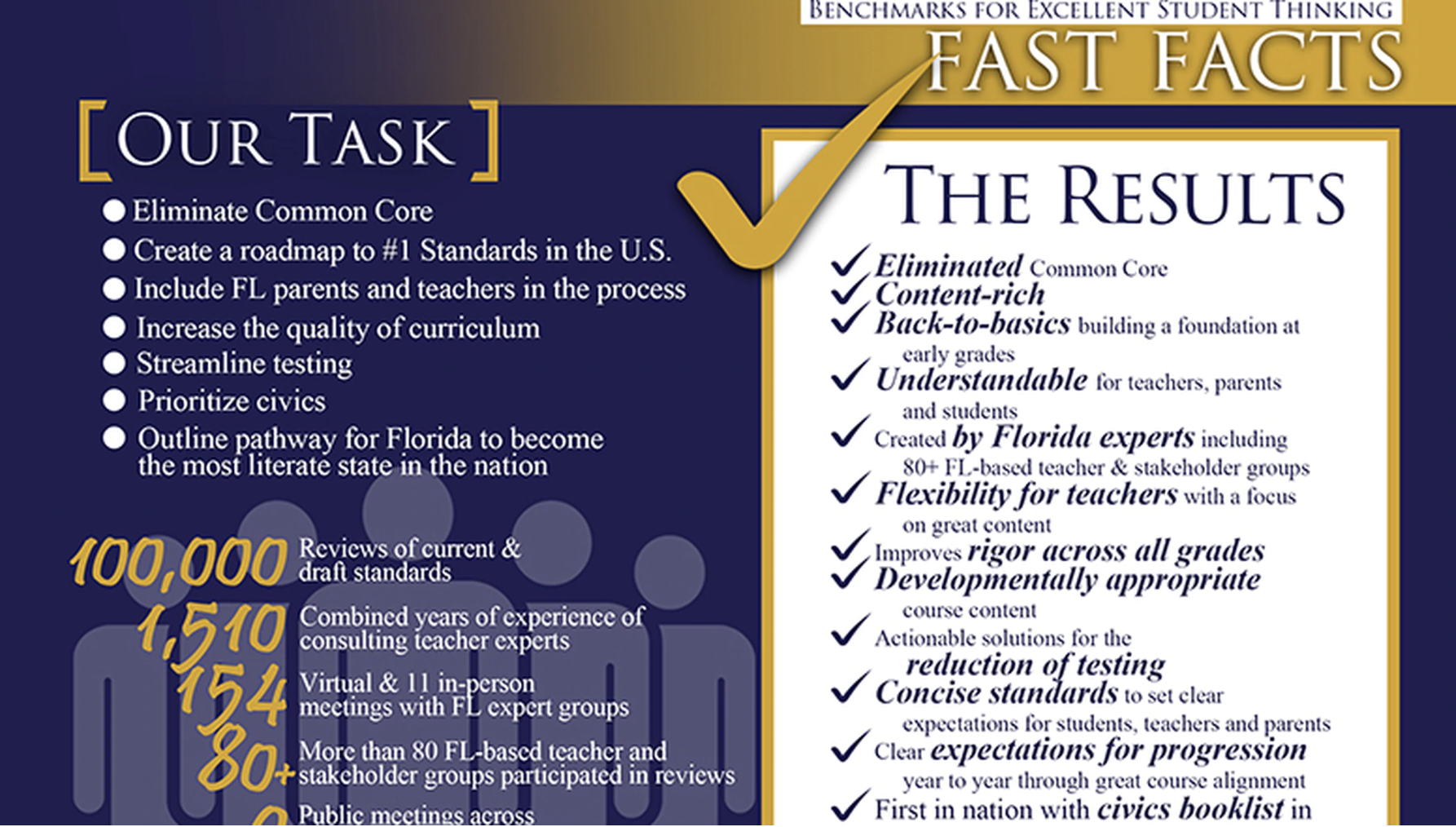 Have input on Florida's school standards? Better be quick.

Have input on Florida’s school standards? Better be quick.

Angling to stick to a set time frame, the Florida Board of Education has scheduled Feb. 12 as the date it intends to consider adoption of the state’s proposed new academic standards. That’s just two weeks after the Department of Education unveiled the detailed documents, which number 216 pages for math and 220 pages for language arts, and just three weeks after Gov. Ron DeSantis unveiled the overview to eliminating Common Core with the message “mission accomplished.” [Source: Tampa Bay Times]

Universities set up front-line defenses to keep coronavirus at bay

Florida health officials are letting the federal government lead the way in warning the public about the growing threat posed by the deadly coronavirus, but some leaders are pushing for stepped-up action in a state that is a magnet for travelers. Florida colleges and universities, where illnesses spread easily and where many also have students and staff traveling to and from China, have taken an aggressive stance toward getting out word on what to watch for. More from the Crestview Bulletin and Reuters.

Could Florida save millions with solar schools proposal?

With Gov. Ron DeSantis’ $600 million proposal to increase teacher salaries, many state legislators are scratching their heads to find ways to fund this bold initiative. One potential solution may come from an unlikely place. Democratic state Sen. Lori Berman (D-Boynton Beach) is advocating for a solar schools proposal that could make it easier for schools to save money on energy costs. [Source: The Floridian]

Should all Florida high schoolers have to take the SAT or ACT? Lawmakers say yes.

A sweeping bill that would both change testing requirements for K-12 students as well as the processes for low-performing schools passed its first committee on Tuesday. The bill contains several test eliminations, including the now-required high school reading test and the end-of-course geometry test, though the latter would require approval from the federal Department of Education. [Source: Tampa Bay Times]

› Florida students' high school science project is headed to the space station [Tampa Bay Timess]
Before their senior year, Amanda Marrero, Emily Null and Shelly Nonnenberg had only a passing knowledge of antibiotics, bacteria and the science surrounding them. They barely knew each other, having attended different schools until enrolling at Krinn Technical High as juniors. Now they are friends, expert in their biomedical research field, and winners of a contest that will send a project they developed into space.

› Florida House committee considers records exemption for college searches [WOFL]
A key House committee Thursday could begin moving forward with a proposal that would prevent the release of information about people applying to become presidents of state colleges and universities. The House State Affairs Committee is slated to take up a bill (PCB SAC 20-04) that would create public-records and public-meetings exemptions for presidential search processes.

› Some Central Florida students could start school in afternoon under new proposal [WESH]
An official with one Central Florida school district has floated an idea that would upend the traditional school day and give kids more flexibility. Osceola County School Board Chairman Kelvin Soto believes kids should have a choice as to when they start their day. He’s proposed a flex schedule that would allow students to start their day as late as 3 p.m.

The same way Spider Man has his web shooters and mechanical arms and Thor has his hammer and battle ax, University of West Florida student and self-taught costume builder Noah Wright has his EVA foam, a heat gun, an X-Acto Knife and a Dremel. Using those “weapons” of choice, along with some glue and paint, the 21-year-old has built some of the most intricate, realistic-looking superhero and pop culture costumes you’ll see outside of the dressing rooms of a big-budget Hollywood film studio.