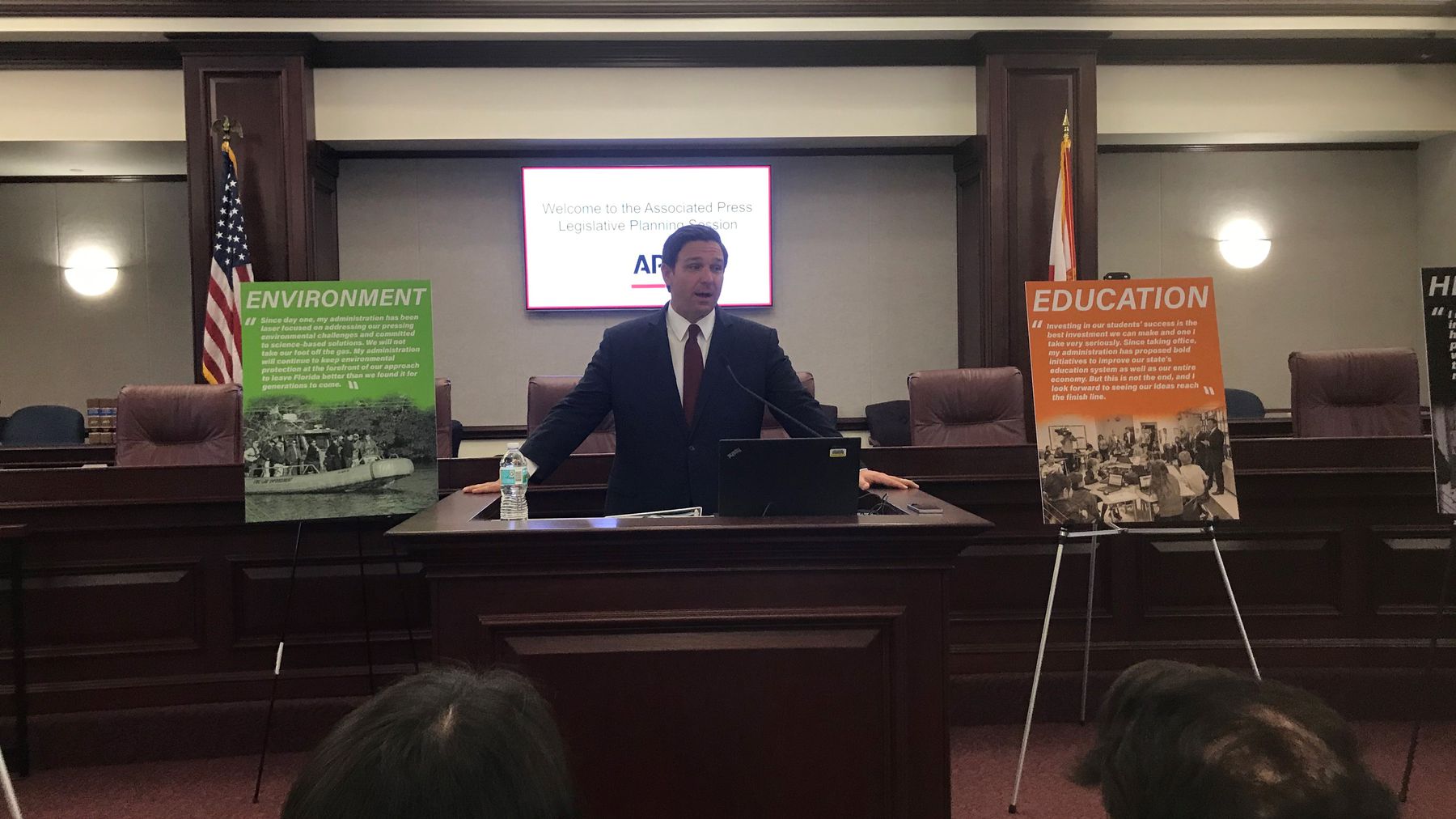 DeSantis proclaims ‘year of the teacher' in pushing for higher wages

DeSantis proclaims ‘year of the teacher’ in pushing for higher wages

Gov. Ron DeSantis said that passing his proposal to give teachers a raise is one of his top priorities for the 2020 state legislative session. “This coming legislative session really needs to be the year of the teacher,” he told a roomful of reporters at the annual “AP Day” event, where the state’s top elected officials speak to the media. State lawmakers are scheduled to begin officially meeting on Jan. 14 to discuss and pass bills through March 13. More from that Tampa Bay Times, Fox 4 Now, and MyPanhandle.com.

College enrollment down in Florida, but that's not the whole story

According to U.S. Department of Education figures, enrollment at some Florida colleges and universities has decreased in the past five years. But sometimes those numbers don’t show the full story. “When you have more schools trying to grow, and fewer students or similar numbers of students (enrolling), it's just not mathematically possible for everybody to get the number of students they're wishing to enroll each year,” said John Sullivan, Vice President of Enrollment at Eckerd College. [Source: WLRN]

Florida college athletes could see financial benefits by next summer

Following California’s lead, Florida lawmakers are tackling NCAA rules that prohibit college athletes from reaping financial benefits from their prowess in the arena of big-money sports. With a bounty of marquee college sports programs, Florida could help student athletes flex their muscles as they take on the NCAA, which governs college athletics. [Source: Gainesville Sun]

Florida’s public charter schools and their private peers, including those that don’t participate in state-backed scholarship programs, should have to adhere to the same requirements as the traditional public schools, according to an Orlando lawmaker’s proposal. Private schools would be required to hire teachers who have bachelor’s degrees or prove they have special skills, administer the state’s standardized tests and receive A-to-F letter grades just as their public counterparts do. [Source: Orlando Sentinel]

› Stetson University in Central Florida chooses Vassar academic as next leader [Orlando Sentinel]
Vassar College academic Christopher Roellke was selected as the next president of Stetson University, where he’s to succeed Wendy Libby after her planned retirement this summer from the DeLand school’s top post, where she spent a decade.

› Florida students launch viral petition for day off after Halloween [Lakeland Ledger]
A recent trend that seems to be picking up steam is students petitioning to have the day off after Halloween. In fact, more than 350,000 people in school districts across Florida have signed an online petition with change.org hoping to cancel classes on Nov. 1, the day after Halloween. These requests aren’t limited to Florida. Thousands of petitions with more than a million signatures have also called for the same in school districts in Georgia, Colorado and Michigan, among other states.

A Florida man is being praised for his selfless actions after he donated nearly $1,000 to schools in Jupiter to help pay off the lunch debt.