Hurricane Michael caused production losses totaling $158 million for Florida’s agricultural industries in the 2018-19 growing season, according to economists with the University of Florida Institute of Food and Agricultural Sciences.

The dollar estimate, along with more detailed information, has been forwarded to state and federal agencies to facilitate relief efforts, said Jack Payne, UF senior vice president for agriculture and natural resources.

"No one understands the magnitude of this disaster more fully than our UF/IFAS Extension agents based in the Panhandle,” Payne said. “They rose to the occasion and connected with farmers, landowners and property managers to obtain raw data concerning the status of their crops before and after Hurricane Michael struck. We even used drones to obtain aerial images of crop fields. Then, the UF/IFAS Economic Impact Analysis Program team extrapolated from the raw data to produce a comprehensive figure for the entire affected area. To ensure that their calculations were accurate, the team engaged in discussions with state agencies, commodity groups and other academic experts to obtain their input."

The $158 million figure represents lost sales revenues that producers would have received during the 2018-19 growing season if the storm hadn't impacted them. Economists use the term "losses" to describe this outcome, said Christa Court, an assistant scientist with the UF/IFAS food and resource economics department and EIAP assistant director.

"Our analysis did not address clean-up costs, repair and replacement costs for damaged property, medical and veterinary expenses, or any long-term economic effects of the hurricane," Court said. "We needed to focus initially on developing the loss estimates needed for relief efforts, but we intend to continue to develop estimates for the broader economic impacts of the hurricane. County-level estimates will be released in the very near future."

Nearly 1 million acres of agricultural crops, not including timber, were impacted throughout the Panhandle, Court said. 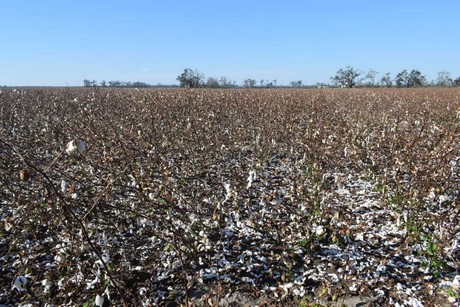 Virtually all of the state’s cotton crop was wiped out, with losses totaling $51 million on more than 145,000 impacted acres. When the hurricane made landfall in Bay County on Oct. 10, annual harvesting efforts had just begun, and more than 90 percent of the crop remained in the field.

More than 245,000 acres of peanut were impacted, resulting in losses of $22 million.

Field corn, which saw a 100 percent loss on many farms where harvesting was not already completed, had more than 66,000 acres impacted and losses totaling $5 million.

Specialty crops in the Panhandle also suffered significant losses, including $39 million for greenhouse, nursery and floriculture production, $9 million for vegetables and melons, $4 million for fruits and $3 million for tree nuts including pecans.

Field reports indicate that a significant number of livestock animals went missing after the hurricane, including beef cattle, deer, horses and hogs. Most of the animals disappeared from sites with damaged fencing or enclosures. Total production losses for the expected three to six weeks of disruption to animal agriculture operations in the region were estimated at $23 million.

In addition, the Florida Forest Service, a division of the state Department of Agriculture and Consumer Services, estimated Florida’s timber losses at $1.29 billion for pine, mixed upland hardwood and bottomland hardwood timber across a total of 2.81 million acres, in a report released Oct. 19. These figures represent timber that would normally be harvested over several years, Court said, and should not be viewed as a one-year loss figure. Therefore, total timber losses caused by Hurricane Michael cannot be directly compared with agricultural crop losses involving plants that are grown and harvested in a single year, such as cotton.

The UF/IFAS economists concluded that Hurricane Michael was the most serious natural disaster to impact agricultural and natural resources industries in the Florida Panhandle in decades.