This elongated peninsula — closest American land mass to the Southern Hemisphere — is home to one of the nation’s most extensive multimodal transportation systems.

In Florida, raw materials flow in to manufacturers and finished products flow out to end-users by land, sea and air with the greatest of ease. For businesses looking to boost their logistics and distribution capabilities, Florida simply has to offer what other states do not.

Is it any wonder that major players in logistics and distribution are flocking to Florida?

The interconnected transportation systems to serve these companies, as well as any potential new arrivals, are also in growth mode. Seaports are expanding to meet the needs of ever bigger cargo ships and cruise liners, while airports add gates and lengthen runways. In Orlando, work continues on “I-4 Ultimate,” a $2.3-billion project to improve the highway that is the backbone of central Florida’s transportation system. The fast passenger train Brightline runs between Palm Beach and Miami, and as construction begins on its Miami to Orlando segment, there is talk of extending the line to Tampa.

Florida’s interconnectedness reaches cyberspace too. The Network Access Point in Miami serves as a major switching station for internet traffic coming into and out of Latin America, while other high-speed networks, such as Florida Lambda Rail and LA Grid, facilitate R&D efforts. In addition, Florida has some of the fastest and most widely available wireless networks. 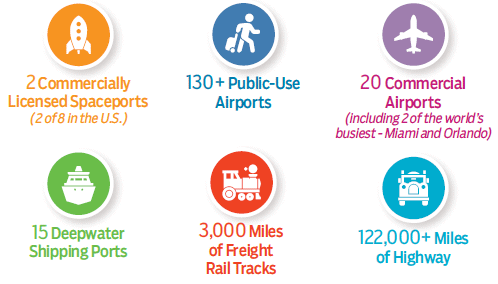