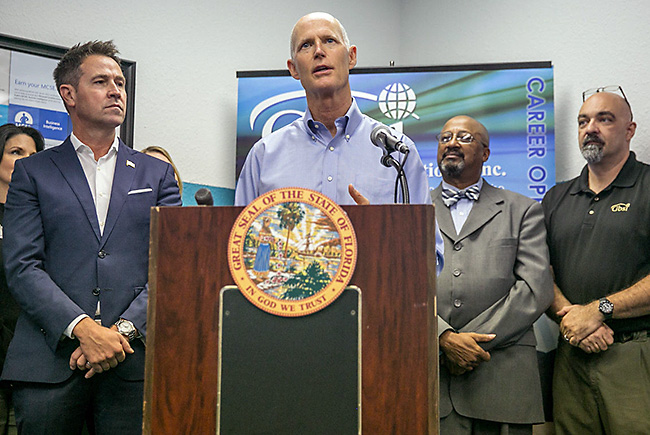 Florida Governor Rick Scott promotes his $180 million sales-tax “holidays” at a stop in Pensacola on November 8, 2017.

State officials in Florida have something to crow about: the Sunshine State ranks among the Tax Foundation's Top 10 states for business tax climate.

In Florida and across the country, the Tax Foundation’s State Business Tax Climate Index is serving as a barometer for state officials and residents to gauge how their state’s tax system stacks up to other states nationwide.

Measuring how much tax revenue is generated by state government isn’t an exact science and there are a number of ways to do it. The Tax Foundation points out that its index is designed to show how well states structure their tax systems, and provides a roadmap for improvement.

The Tax Foundation – a nonprofit, nonpartisan tax research organization founded in 1937 and based in Washington, D.C. – compiles the index to rank states for the competitiveness of their tax codes.

Florida comes in at No. 4 on this year’s list. Other states in the Top 10 include Wyoming, South Dakota, Alaska, Nevada, Montana, New Hampshire, Utah, Indiana and Oregon.

John Buhl, media relations manager at the Tax Foundation, said that the absence of a major tax type, such as a corporate income tax, individual income tax or sales tax, is one common factor among states in the Top 10.

As for the other tax component scores of the top states, the rankings reflect how efficiently the tax raises revenue, not the total tax burden, according to Buhl.

“Florida relies more heavily on its sales tax than other states, since it doesn’t have an income tax, but its sales tax structure ranks 29th, somewhat in the middle of the pack,” he said. “It also scores fairly well on property taxes (10th) and unemployment insurance taxes (2nd).”

Amber Hughes, senior legislative advocate for the Florida League of Cities, pointed out that the Sunshine State typically fares well in surveys like the State Business Tax Climate Index

“Florida always ranks in the Top 10,” she said. “We are usually within the Top 5. Other studies have ranked us at No 3. It is quite common for us to rank well.”

The state’s ranking in similar surveys may vary, but Hughes said a lot of that comes down to the criteria that is used to develop a ranking list.

“With this report, personal income tax is a factor and we don’t have that,” she pointed out. “It is going to be beneficial for a ranking and also very beneficial when businesses are looking to locate here.”

Hughes also noted that Florida lawmakers have done a pretty good job with being thoughtful about the state’s taxation and how they tax.

Earlier this month, Florida Gov. Rick Scott proposed plans to cut driver's license fees and offer a series of sales-tax “holidays” in the state as part of a nearly $180 million package.

According to a statement, the plan is a part of Scott’s final budget recommendations.

“Over the past seven years, we have worked relentlessly to turn around Florida’s economy, and the results are clear,” Scott said in the statement.

Florida also has been selective in its tax policies and, during her tenure in examining tax policy in the state, Hughes pointed out that taxes have always been linked to personal income growth.

“The thought is that taxes shouldn’t grow faster than the ability of a resident or business to pay for it,” she said.

Those types of decisions help sow the seeds for a vibrant business climate, one that can have a positive impact on residents.

“We want to have cities that people want to live, work and play in,” Hughes said. “It is a fine line to have the services they want and need and how to pay for them.”

A friendly tax climate also serves as a magnet for new businesses and it helps existing businesses expand.

“This not only creates jobs, but it also creates nice communities and a healthy economy, which at the end of the day I think most residents want,” Hughes said.

A key industry in Florida is tourism, and the tax climate’s impact on business is a hot topic no matter the season in the Sunshine State.

Currently, revenues can only be spent on tourism promotion, including building or renovating sports stadiums, convention centers or other attractions, and tourism advertising campaigns.

A version of the bill has been filed in the Florida Senate, but Senate Bill 658 has yet to receive a hearing, according to legislative records.

Ultimately, tax policy has an impact on tourists, even though they are only visiting the state for a brief period.

“Tourists want things to do, places to eat and places to shop,” Hughes said. “This is all tied to the economy. While we have beautiful beaches and Disney, there is more to do in Florida than go to the beach or Disney, even though those are great things to do.”

This story is from Watchdog.org.

In a stunning rebuke to one of the state’s longest serving social services agencies, a Florida House committee subpoenaed its executives Thursday and the governor launched an investigation.

The CDC sent novel coronavirus testing kits to Florida. They might not work

Florida health officials received testing kits for novel coronavirus earlier this week but can’t use them yet because it’s unclear whether the tests are working.

Get your adrenaline pumping with this Florida State Fair stunt show

Bello Nock and his daughter, Annaliese, are just two of the daredevils performing at the Florida State Fair.