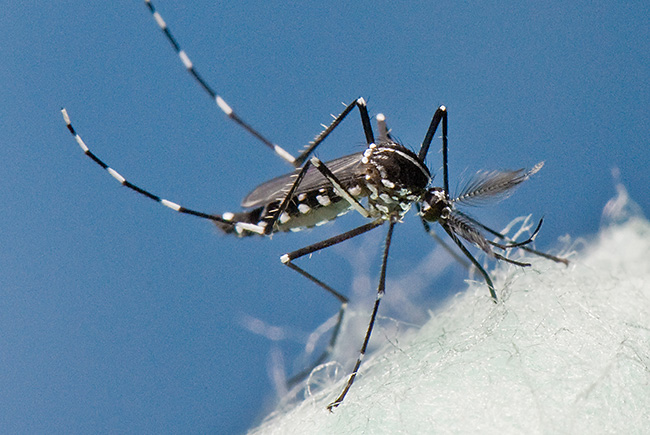 UF/IFAS scientists, led by entomology associate professor Chelsea Smartt, have found Zika virus RNA in Aedes albopictus, also known as the Asian Tiger Mosquito, seen above. Aedes agypti has received the most media attention since the Zika virus broke out. But scientists never discounted Aedes albopictus as a possible transmitter of the dangerous virus.

GAINESVILLE, Fla. — A University of Florida Institute of Food and Agricultural Sciences molecular biologist has found Zika RNA in a type of mosquito not often associated with the virus.

UF/IFAS entomology associate professor Chelsea Smartt led a research team that found Zika RNA in Aedes albopictus. That’s not the species — known as Aedes aegypti — most often associated with Zika. But scientists have never discounted Aedes albopictus as another possible carrier of the potentially deadly virus.

Brazil has the highest number of reported Zika virus cases worldwide, with more than 200,000 as of December 2016. So, Smartt set her sights on tracking down Zika-infected mosquitoes in Camacari, Brazil, near the Atlantic coast.

Smartt and her research team collected 20 female and 19 male Aedes albopictus mosquitoes as eggs, raised them to adults and tested the adults for the Zika virus RNA. They found five of them positive for Zika RNA, Smartt said.

“These results are important because they are the first to show that Aedes albopictus can be infected with Zika virus RNA,” said Smartt, a faculty member at the UF/IFAS Florida Medical Entomology Laboratory in Vero Beach, Florida. “Also, this study found Zika virus RNA in male mosquitoes, which we can infer also means the Zika virus RNA came from the mother. We need to determine if live Zika virus can also be transmitted in Aedes albopictus.”

The findings show that mosquitoes, like Aedes albopictus, in an area with a high density of Zika virus, can contain Zika virus RNA and then these mosquitoes must also be tested for live Zika virus before transporting them to a laboratory for further experimentation to ensure they are not able to transmit live Zika virus.

Since researchers and the media started seriously chronicling the Zika virus in the U.S. in 2015, Aedes agypti mosquitoes have received a lot of attention. Scientists have found that Aedes aegypti is the main type of mosquito that spreads Zika, dengue, chikungunya and other viruses, while Aedes albopictus is less likely to spread Zika and other similar viruses.

Aedes aegypti and Aedes albopictus mosquitoes abound in Florida, throughout most of the Southeast and in all the states along the southern border of the U.S., according to the U.S. Centers for Disease Control and Prevention. The range of Aedes albopictus expands into the Midwest. Its role in being able to transmit Zika virus is largely unknown.

Currently there is no vaccine available for Zika virus. To try to avoid mosquito bites, scientists and public health professionals urge people to stay indoors or wear long-sleeve shirts and pants if they’re outdoors, especially during the day, when mosquitoes that might transmit the Zika virus are more likely to bite. They also urge people to apply mosquito repellent containing DEET and remove mosquito-breeding habitats by removing water from containers because that’s where mosquitoes lay their eggs and the immature stages develop.

Smartt’s research is published in the Journal of Medical Entomology.

The J.C. Newman Cigar Company in Ybor City is undergoing restorations to their factory which was built in 1910. This includes the clock tower which is nicknamed “El Reloj,” meaning “the clock” in Spanish.