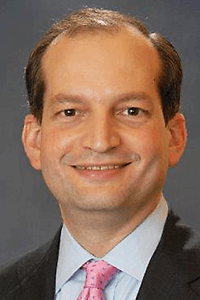 Acosta, 48, joined FIU in 2009 and is the second dean to lead the FIU College of Law. Before coming to FIU he served as the United States Attorney for the Southern District of Florida.

During his tenure at FIU, Acosta spearheaded the effort to establish the J.M. degree in banking compliance, BSA and anti-money-laundering at FIU Law. Under his stewardship, FIU law graduates also have ranked first among Florida’s 11 law schools in the bar passage rate three times in a row, for the July 2015, February 2016 and July 2016 examinations.

“Alex Acosta is a thoughtful, conscientious American who is dedicated to excellence, integrity and public service. We are proud that he is the first Hispanic nominated to serve in President Trump’s cabinet,” said FIU President Mark B. Rosenberg.

A native of Miami and first-generation university graduate and lawyer, Acosta earned his undergraduate degree from Harvard College and his law degree from Harvard Law School. After serving as law clerk to Justice Samuel A. Alito, Jr., then a judge on the U.S. Court of Appeals for the Third Circuit, Acosta practiced law at the firm of Kirkland & Ellis and taught law at the George Mason School of Law.

Acosta has served in three presidentially-appointed, senate-confirmed positions. He was a member of the National Labor Relations Board, where he participated in or authored more than 125 opinions. He went on to be the first Hispanic to hold the rank of Assistant Attorney General before becoming U.S. Attorney in 2005.

Acosta is the chairman of U.S. Century Bank, the largest domestically-owned Hispanic community bank in Florida and one of the 15 largest Hispanic community banks in the nation.  Acosta also serves as chairman of the board of trustees of Gulliver Schools, and, among his many accomplishments, has twice been named one of the nation’s 50 most influential Hispanics by Hispanic Business Magazine. In 2013, the South Florida Hispanic Chamber of Commerce presented Acosta with the Chairman’s Higher Education Award in recognition of his “outstanding achievements, leadership and determination throughout a lifetime of caring and giving back to the community.”

“Alex Acosta has catapulted FIU Law to the ranks of top law schools in a very short time by focusing on the challenges being faced by the legal profession and finding creative new solutions,” said Cesar L. Alvarez, senior chairman of Greenberg Traurig, LLP and a member of FIU’s Board of Trustees. “His nomination as labor secretary is a testament to his leadership, hard work and groundbreaking accomplishments in a rapidly changing world.”