Florida receives D+ on women's poverty and access to opportunity, with wide disparities by county

Washington, DC — A new county-level analysis of the status of women in Florida, released by the Institute for Women’s Policy Research (IWPR) in partnership with the Florida Women’s Funding Alliance (FWFA), finds that women in Florida have higher rates of poverty, lower educational attainment, and lower access to health insurance coverage than women in the United States overall, but the state ranks 5th in the nation on women’s business ownership. The report estimates that if working women in Florida were paid the same as comparable men—men who are of the same age, have the same level of education, work the same number of hours, and have the same urban/rural status—the poverty rate among all working women would fall by 57.3 percent. 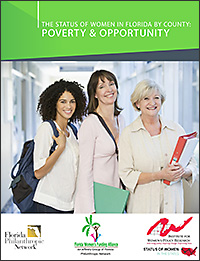 There are two reports on the status of women in Florida by county:
» Poverty and Opportunity
» Population and Diversity

Florida overall received a D+ on IWPR’s Poverty and Opportunity Index—which scores states based on the percent of women living above poverty and women’s access to health insurance, a college education, and business ownership—but the report finds wide disparities in women’s status by county and by race and ethnicity.

“In the last decade, Florida’s grade on the Poverty & Opportunity Index has remained stuck at D+,” said Julie Anderson, IWPR Research Associate and author of the report. As the state grows more diverse, addressing the economic insecurity faced by women of color will be critical to improving the state’s economy overall.”

Additional findings from the report on women’s Poverty & Opportunity in Florida include:

Women make up 51 percent of the 19.4 million residents in Florida, the United States’ fourth most populous state. A companion report released by IWPR and FWFA finds that the state is more racially diverse and has larger proportions of immigrants, older women, and older men than the nation overall.

“Women’s poverty levels—and their access to opportunity in Florida—depend on where they live,” said Julie Fisher Cummings, founder/CEO of Lovelight Foundation and co-chair of FWFA. “State policymakers, grantmakers and community leaders must consider how proposed policies affect diverse populations in different ways and must take bold steps to reduce inequality and ensure that prosperity in our state is more widely shared.”

The Institute for Women’s Policy Research (IWPR) conducts rigorous research and disseminates its findings to address the needs of women and their families, promote public dialogue, and strengthen communities and societies. IWPR is a 501(c)(3) tax-exempt organization that also works in affiliation with the women’s studies, and public policy and public administration programs at The George Washington University.

The Florida Women’s Funding Alliance (FWFA) is an affinity group of Florida Philanthropic Network (FPN),that envisions a Florida where women and girls thrive. The FWFA mission is to transform the lives of women and girls through members’ collective voices and resources. The Florida Philanthropic Network is a statewide membership network of nearly 120 philanthropic organizations working to build philanthropy to build a better Florida. FPN’s members are private independent, corporate and family foundations, community foundations, public charity grantmakers and corporate giving programs.

What can cornhole do for you? For Manatee, championship boosts economy and friendship

Competitors in this week’s American Cornhole World Championships warm up before Saturday’s final competition at the Bradenton Area Convention Center.