Florida’s elected lawmakers put fewer secret spending projects into the budget in the waning days of this Legislative session, but improvements are still needed to guarantee taxpayers have full openness, transparency and accountability when lawmakers spend their money.

In the $82.3 billion budget approved by lawmakers earlier this month for the FY 2016-17 state budget, 143 projects worth $104.9 million were inserted into the budget without proper public review and were identified as “budget turkeys”, according to the Florida TaxWatch 2016 Budget Turkey Watch Report.

The number of “turkeys” identified in the budget this year is almost 25 percent less than last year and more than a third less in dollar value. The amount of turkeys in this year's budget was the lowest total since 2010. Still, that $104.9 million could have been invested in areas that benefit all Floridians like teacher pay raises, early childhood development, economic incentives or broad tax cuts. 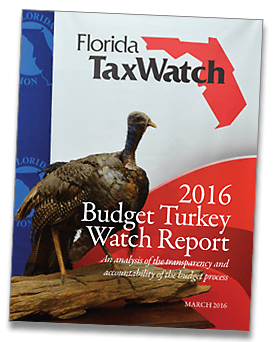 "Lawmakers have clearly heard the call from Florida TaxWatch and their constituents for a transparent and open process that provides the opportunity for taxpayers to know how their hard-earned dollars are being spent,” said Dominic M. Calabro, president and CEO of Florida TaxWatch. “But we cannot have government in the sunshine if the taxpayers’ hard-earned dollars are appropriated in the dark.”

The “Budget Turkey” label focuses only on the budgeting process and is not about recommending vetoes or singling out specific public officials, nor does it judge a project's worthiness or value. The label is given to projects that did not receive proper public deliberation or did not follow the lawfully established budget processes.

During the 2016 Legislative Session, lawmakers made substantial improvements to increase transparency. Many member projects were inserted during the committee process, where they have a chance to be deliberated and properly vetted. We particularly commend the budget chairs – Senator Tom Lee and Representative Richard Corcoran - for their work on the budget and to all lawmakers for ensuring that their priorities were more often funneled through the proper channels. But this does not mean that there are not a significant number of member projects in the budget. Many of those may not be core functions and responsibilities of the state and may not belong in the state budget. But because they enter the process earlier and receive public vetting, they do not qualify for the Budget Turkey label.

Florida TaxWatch urges the Legislature to build on this momentum and increase the scrutiny for all projects by recommending that new statutory competitive selection processes be established for a number of budget areas, including water projects, economic development projects and school and instructional enhancements. Florida TaxWatch also recommends that the Legislature further restrict the use of supplemental lists at the end of conference, avoid adding new projects on these lists and uphold the integrity of the Economic Development Transportation Projects process.

"Florida TaxWatch commends the Legislature for drafting a balanced budget that meets the needs of many of our most vulnerable citizens, makes critical investments in our children’s future and returns money to Florida's hardworking taxpayers through tax cuts.” said Calabro. "As the taxpayers' trusted watchdog, it is an important responsibility to highlight each of the projects that are not properly vetted and deliberated. The Florida TaxWatch report allows taxpayers to hold their elected officials accountable for budgeting decisions."

Each year, Florida TaxWatch produces the Budget Turkey Watch Report, based on the principle that money appropriated by the Legislature belongs to the hard-working taxpayers of Florida and should be appropriated through the established, accountable and transparent budgeting process. The annual independent budget review sheds a light on appropriations that did not go through public deliberation or circumvented the process, and continues to advance budget transparency, fiscal integrity and taxpayer accountability.