Analysis: Investing in second-stage companies would add 25,000 jobs to Florida

GrowFL, a state program designed to grow and develop the biggest job-creating companies in Florida should be expanded, according to a new report from the independent, nonpartisan, nonprofit public policy research institute, Florida TaxWatch. The independent analysis from Florida TaxWatch shows that the program's impact statewide over the next ten years would help produce 25,000 jobs, diversify the state economy and provide positive return on Florida's investments.

The GrowFL program works to develop small but growing companies with high job creation potential with an average salary of more than $77,000, according to the TaxWatch report. TaxWatch estimates that expanding the program would generate $16.54 million per year over the next 10 years.

"Florida has successfully invested in promoting the state's innovation economy by targeting entrepreneurial second stage companies with great growth potential through GrowFL," said Dominic M. Calabro, president and CEO of Florida TaxWatch. "Expanding the GrowFL program is a great way to grow the state economy by investing in second-stage companies, which are now responsible for more than 30 percent of all Florida jobs." 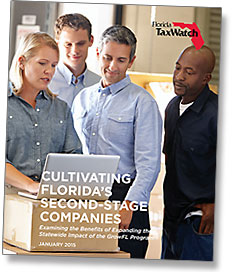 Companies selected to participate in GrowFL must be a for-profit company with revenues between $1 million and $50 million employing between 10 and 99 people. They also must be able to sell their products outside of Florida. More than 650 Florida businesses have participated in the program from July 2011 - June 2013, resulting in more than 1,867 net new jobs.

"Since its inception, GrowFL has been singularly committed to providing the strategies, resources and support that second-stage companies require to grow and prosper," said Tom O'Neal, Associate Vice President of Research & Commercialization at UCF, Executive Director of both the UCF Business Incubation Program and GrowFL. "Based on the well-proven economic gardening philosophy, GrowFL continues to serve as a powerful catalyst in the Florida's economic development strategy by helping these companies succeed and create jobs within the state. Research from organizations such as Florida Tax Watch reinforces what our data has continually shown - GrowFL and economic gardening works."

"The Corridor has been proud to support and sustain the efforts of GrowFL since the program was established by the state in 2009," said Randy Berridge, president of the Florida High Tech Corridor Council. "From the outset, this economic gardening program has demonstrated impressive results that have become a model for many other regions and states across the country. By validating GrowFL's success and even reporting a higher return than our original conservative estimates, TaxWatch proves that GrowFL is the right approach to economic development in Florida."