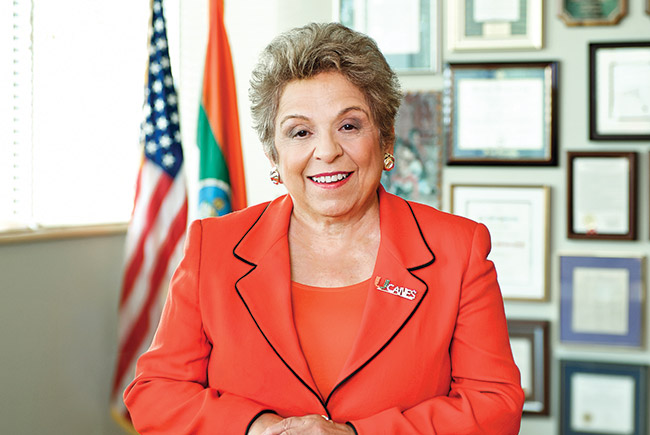 After 14 years as president of the University of Miami, Donna Shalala, 73, will retire next year (although she plans to keep teaching at the university). Her tenure has seen the school move into the top 50 of U.S. News & World Report’s national college rankings and its sports teams shift into the Atlantic Coast Conference.Her administration also conducted two major fundraising campaigns: The $1.4-billion “Momentum” and the $1.6-billion “Momentum2.”

Donna Shalala: I actually wanted to do it four years ago, but because of the economic downturn, I made the decision that I would stay and I would finish a second campaign.Normally, I would have been out of here in 10 years because that’s about what my mindset is. … I’ve done everything that I think I can do with my talent level. The major decisions of the future have a lot to do with technology.We’re about to make some announcements about online education. We’ve invested millions in new IT systems and new systems to manage the place, which no one will see, but we’ve brought the place up to the 21st century, at least.

FT: How did you move the University of Miami into the top 50?

FT: What academic changes are you most proud of?

DS: All of our schools and colleges improved, and most recently, breaking down the silos between schools so that students could combine majors, could design their own majors, could take a series of interrelated courses. As you recruit better students, they demand flexibility because they’re interested in many things. So if you want to recruit better students, you’d better have the courses and the programs that they’re attracted to.

FT: You oversaw a lot of investment into UM’s Miller School of Medicine and its Uhealth medical care. Why focus on that?

DS: We wanted to make contributions in our community of Florida and south Florida. The best universities in this country have an array of programs, including medical schools. … Now, the difficulty there is predicting what’s going to happen in health care. … The key was recruiting leaders in the Miller School who knew what it was like to be at a world-class medical center and keeping the talented people we had, making sure they had a strategy and then supporting them. We did that across the board in the university, but most people recognize our clinical care and our research at the Miller School.

FT: What are you focusing on during the next few months?

DS: We want to finish up the campaign, we’ve got a lot of hiring to finish up, and there’s a lot of things I want to do for students, including finishing some new housing.… It’s the one thing I haven’t been able to finish. But the strategic plan is in place, and we will have the financing in place. The board of trustees is determined to get it done.

Miami-based medical device company Sanomedics makes one of the few thermometers that can take someone’s temperature without touching the person. The Centers for Disease Control, airports and hospitals began bombarding the company with orders for its Caregiver TouchFree thermometer in October in the midst of the Ebola scare, leading it to dramatically increase production. The TouchFree, which is FDA-approved, takes a person’s temperature by measuring infrared radiation when held up in front of the forehead.

Swire Properties promoted Linda Chu to CFO. Chu, who had been head of finance for the company’s Swire Hotels division, will be based in Miami.

ISLAMORADA — Washington, D.C.-based Carlyle Group purchased the Postcard Inn Beach Resort at Holiday Isle and the La Siesta Resort. The company plans to spend about $18 million to renovate both hotels. Carlyle also combined the Islamorada Resort and Pelican Cove Resort & Marina, which it owns, with the two additional hotels to form the Islamorada Hotel Co.

MIAMI-DADE COUNTY — Latin American health care company Organización Sanitas Internacional will open three primary-care clinics next year in partnership with Florida Blue. The clinics will focus on recent immigrants from Latin America. > Interval Leisure Group acquired Hyatt Residential Group from Hyatt Hotels for $220 million; Interval and Hyatt also signed a license agreement giving Interval exclusive use of the Hyatt brand in shared ownership developments. New York-based venture capital firm Scout Ventures is opening a Miami office, its first outside New York. > The University of Miami sold some 88 acres to Palm Beach Gardens- based developer Ram. Ram has permission to build a 158,000-sq.-ft. Walmart, a shopping center and some 900 apartments on the site and agreed to set aside 40 acres as a preserve. Chemicals company Platform Specialty Products raised $410.9 million in a private stock placement in October and planned to raise another $240.6 million in a November private offering. For the first time in two years, Miami International Airport will have service from a low-cost air carrier this month when Frontier Airlines begins flights between MIA and four U.S. cities.

One week away from Election Day: Your options for mail-in voting

We are one week away from Election Day and that means it is a very important deadline if you plan on mailing in your ballot.