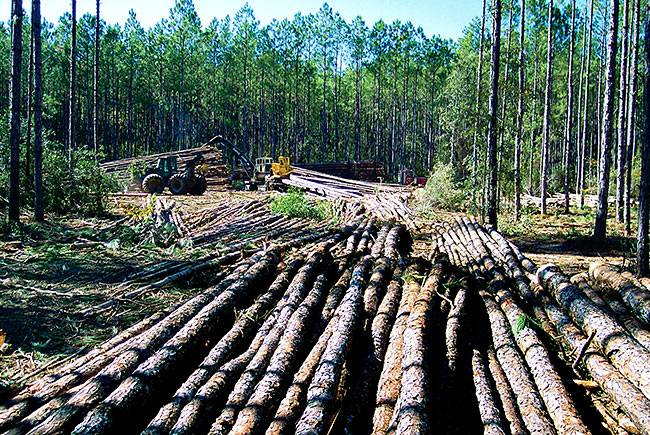 St. Joe Co. gets out of the woods in Northwest Florida

St. Joe Co. Is selling the majority of its woodland property in northwest Florida. At approximately 383,000 acres, the land counts for more than two-thirds of the company's timberland and rural land. The buyer, AgReserves, a taxpaying affiliate of the Church of Jesus Christ of Latter-day Saints, purchased the land for $565 million.

St. Joe still owns approximately 184,000 acres, mostly in northwest Florida. "The proceeds from the sale will provide the company with significant liquidity and numerous opportunities to create long-term value for our shareholders," Brady says.

The company is a partner in the Pier Park North shopping center in Panama City Beach, opening this spring.

The transaction, expected to close this quarter, means the Mormon church will own nearly 2% of Florida land and become the state's largest landowner. The church will maintain the property it's acquiring from St. Joe for timber and agricultural use, it says.

"AgReserves has demonstrated its commitment to wise land stewardship and prudent resource management during more than 60 years of ranching and agricultural operations in east-central Florida," says Paul Genho, AgReserves chairman.

"We will apply that same commitment and expertise to managing the property we are acquiring in Florida's panhandle. We look to the long term in everything we do."

The Silver Door Hands on Arts & Crafts Center, a family-run art studio in Bonifay, sits on a 13-acre ranch with a pond, old trees and lush lawns. Owners Mark and Carla Templeton grew up in South Africa and met in St. Martin in the Caribbean before making Holmes County their home with their two daughters. They converted an old barn and farmhouse into a place for creative types of all ages to attend art classes and workshops.

BAY COUNTY — Tyndall Air Force Base received the first five of 24 combat deployable F-22 Raptors from Holloman Air Force Base, N.M., for the reactivated 95th Fighter Squadron as part of the new combat mission. The base will have the largest collection of F22s in the world — more than 50 — and is the only base that trains Raptor pilots. The program will add more than 1,100 jobs.

PANAMA CITY — The Marie Hotel and the Buccaneer Beach Motel, two downtown businesses that have been in operation for more than 50 years, are looking to update and expand over the next 10 years. » Superior Residences, a Nice ville based assisted living facility specializing in Alzheimer's and other memory disorders, broke ground on an additional memory-care building in Panama City, creating at least 50 jobs.

PANAMA CITY BEACH — Business owners on the east end of Panama City Beach began a cooperative marketing effort to brand the area as the "Gateway to the Gulf," as the west end continues to grow with the addition of Pier Park North, opening in the spring.

PENSACOLA — The Florida Institute for Human and Machine Cognition took second place in the second phase of the DARPA Robotics Challenge at Homestead Miami Speedway, competing with the world's top 16 robotics development teams. The final phase of the competition is in December, with a $2-million prize at stake. The Pensacola News Journal's downtown site has been sold to Quint Studer's Daily Convo for $3.4 million. Gannett owned the 5.85-acre property since 1969. The newspaper will relocate. The YMCA may put a new facility on a portion of the site after the building there is razed.

PORT ST. JOE — The city is one of four rural communities chosen to participate in the Competitive Florida Partnership, an initiative with the state's Department of Economic Opportunity, which helps rural communities evaluate and market local assets that can support economic growth.

Made In Space expands facilities, moves headquarters to Florida

Made In Space is moving its corporate headquarters from Mountain View, California, to Jacksonville, Florida.

Developers more and more are building in “wow factor” features as luxury rentals continue to be one of the most lucrative housing models.

Florida lawmakers want same privacy as cops and judges, but why?

The proposal would give lawmakers and Cabinet members the same level of secrecy granted to police officers and judges, making their home addresses, telephone numbers and dates of birth private.

The National Weather Service routinely warns people about falling rain, snow and hail, but temperatures are dropping so low in South Florida the forecasters are warning residents about falling iguanas.