For Chris (standing) and Theresa Imbach (back right), treating employees well means the company is able to attract better contractors, giving it an edge in bidding. 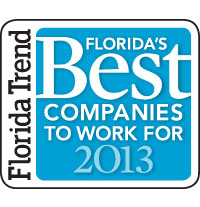 An employee edge at CTI

For CTI Resource Management Services, its reputation as a good place to work means more than bragging rights — it is a matter of corporate life and death.

The defense contracting firm bids on contracts to provide personnel support for the military and federal government. As part of the bidding process, the firm has to recruit employees to fulfill the contract, providing names and resumes before CTI even knows if it has won.

If CTI can recruit better government contractors than its competitors, the company improves its chance of winning that contract. Once CTI is awarded the contract, the recruits become CTI employees.

That’s a big reason CTI is motivated to emphasize employee satisfaction. The firm, which employs 100 at its Jacksonville headquarters, offers perks such as free chair massages and parties, as well as practical benefits such as gifting extra sick days to co-workers.

Chris Imbach and his wife, Theresa, founded CTI Resource in Jacksonville 10 years ago. He wanted to start the defense contracting firm after a career as an administrative officer for the Navy.

“I saw a lot of efficiencies that could be made,” Imbach says. For instance, one of CTI’s first contracts involved consolidating the travel and payroll divisions for more than 20 Navy installations throughout the Southeast into one support service center and hiring personnel to do the work.

“I was able to consolidate everything into a one-stop shopping environment,” Imbach says. “Real estate doesn’t matter anymore. Instead of having people on 26 bases, you can have one person here using technology and do it all in Jacksonville.”

But defense contractors have to offer more than just efficiencies to win contracts, Norton says. That’s why employee satisfaction is vital, she says, aiding in not just recruiting workers, but retaining existing contracts. CTI’s revenue grew to $15 million last year from $3 million in 2004. “The sky’s the limit,” Imbach says.