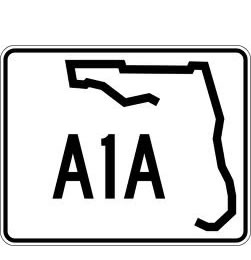 One of the biggest and most expensive items on the sea level rise to-do list is preparing Florida’s roads for higher waters. To prevent flooding from sea level rise and storm surges, roads in low-lying areas will need to be raised, rerouted or have drainage improvements that direct water away from the road.

It is a costly endeavor. In Fort Lauderdale, the state spent $8.3 million earlier this year fixing a half-mile portion of State Road A1A four miles northeast of downtown.

The road, which offers unbroken views of the beach and Atlantic Ocean, was damaged by coastal erosion when Tropical Storm Sandy blew past in October. A potent combination of high tides, the storm and historical sea level rise broke apart a sea wall that protects the road from the ocean, sending waves and sand on to A1A.

The good news is that most of Florida’s interstates are located farther inland and won’t be as susceptible to flooding, says Leonard Berry, head of the Florida Center for Environmental Studies at Florida Atlantic University. But that leaves thousands of less-trafficked roads maintained by cities and counties vulnerable to flooding.

The state has not conducted a formal analysis of what roads are most vulnerable to sea level rise or the cost of maintaining them. But some counties are studying the issue as roads flood more frequ ently, especially in areas like the Keys and Miami-Dade and Broward counties. Chris Bergh, south Florida conservation director at the Nature Conservancy, says most counties don’t have the money for long-term fixes.

“They are thinking about how they will cope with increased flooding as sea level rises, but they get caught up in the present day,” Bergh says. “It’s a real tension. We have immediate problems regardless of what will happen in the future.”