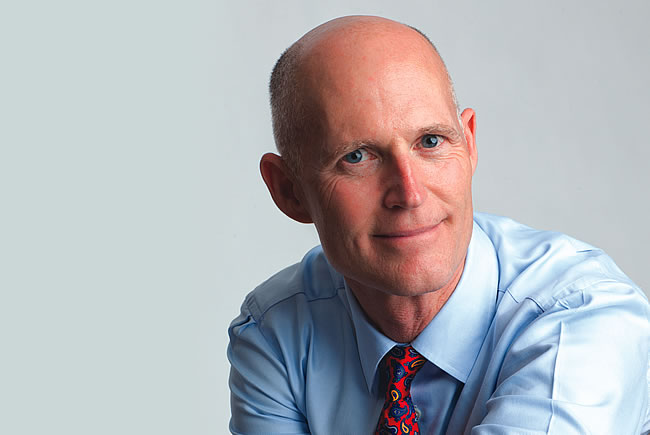 Gov. Scott has made an effort to soften his image during his first two years, raising his favorable ratings and helping him with the GOP establishment. 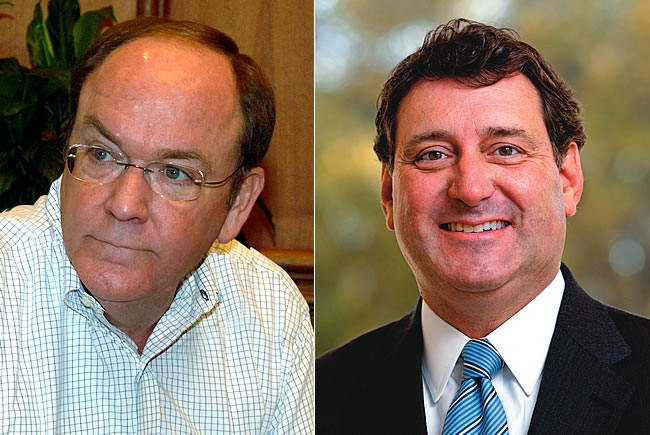 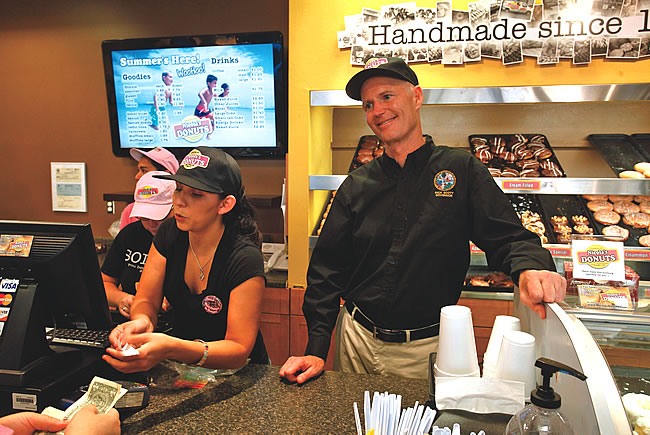 A “Let’s Get to Work” day at a doughnut shop 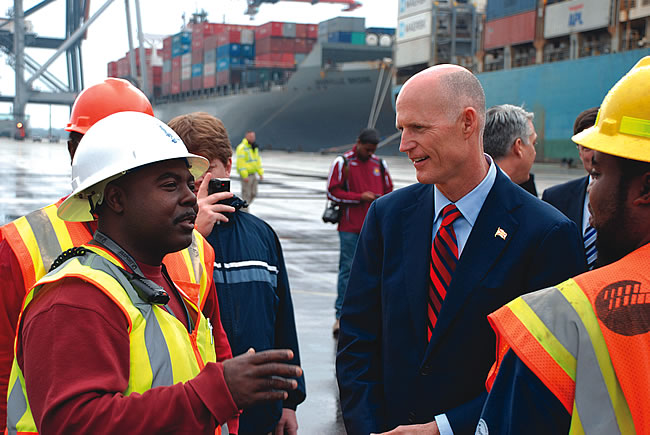 Seaport investment is up 278% under Scott. 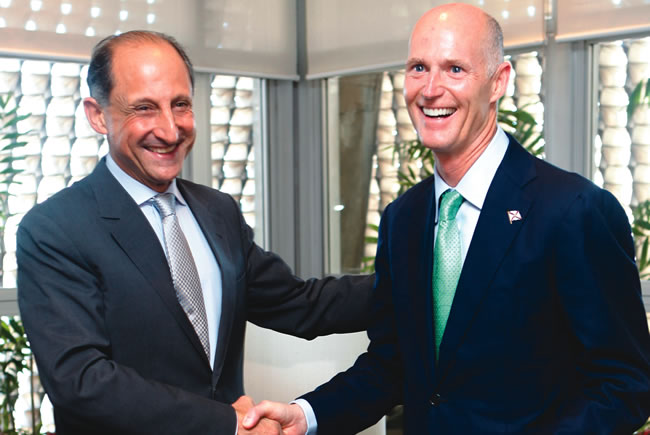 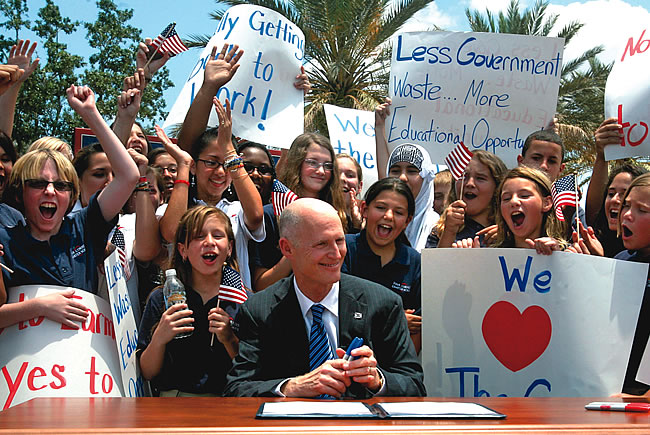 The governor’s effort to eliminate teacher tenure is being challenged in court. 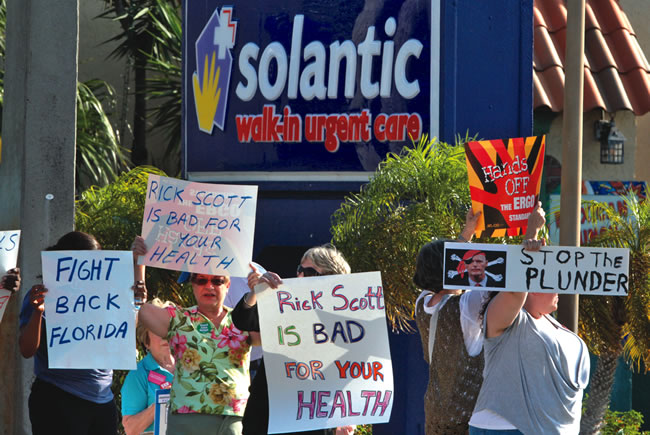 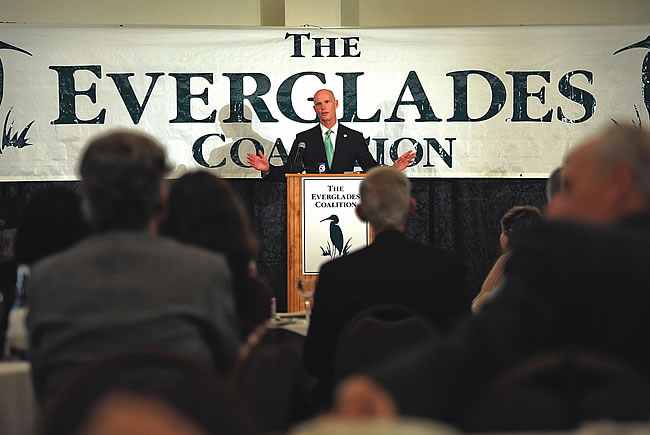 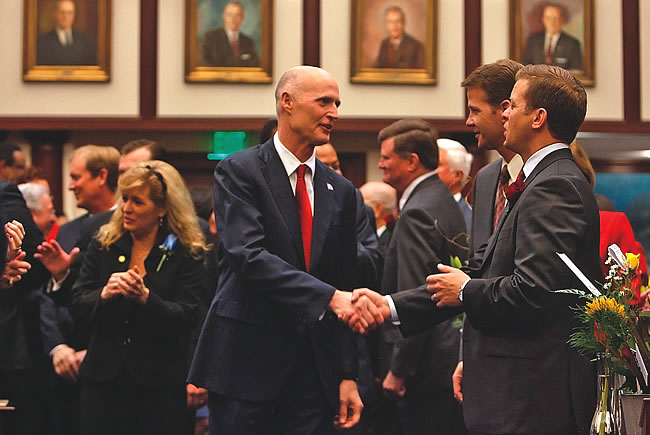 Over two years, Scott has vetoed more than $740 million in “turkey” projects.

Gov. Rick Scott, the outsider, has had to become more of an insider.

The best illustration of Rick Scott’s trajectory as governor of Florida is captured in the way he unveiled his first two budget proposals. In 2011, the rookie governor unveiled his first budget before a tea party crowd in the central Florida town of Eustis, highlighting cuts in state spending and government jobs. He went on to hold a budget-signing ceremony in the square of the Villages, a retirement community populated predominantly by Republicans.

A year later, Scott rolled out his budget at the state Capitol. This time, Scott highlighted a $1-billion increase in spending on public schools — the same line item he’d cut by $1.3 billion the year before. He signed the budget at a Jacksonville elementary school surrounded by smiling schoolchildren.

Between his first and second budgets, Scott’s priorities, core convictions and management style changed little if at all. He had clearly gained, however, an appreciation for the need to cater to appearances as he governed.

Attention to appearances has bumped his favorable ratings among voters from 29% in his first year to 38% presently — still low enough to have Democrats salivating, but with plenty of time to rise further before he seeks re-election in 2014.

It also has helped him with a state GOP establishment he was mostly indifferent to during his self-financed run for office in 2010. So unpopular during his first year in office that some Republican insiders were speculating about a challenger from within the party, Scott no longer hears those whispers. While he’s still no favorite of national Republicans, the state Republican Party has been funding a series of TV ads featuring Scott talking up education and job creation, and Scott won’t have to spend his own money when he runs in 2014. During the first eight months of 2012, his “Let Get to Work” committee has collected $4.2 million.

In 2011, the state Supreme Court said Scott overstepped his constitutional authority when during his first days in office he signed an executive order freezing all pending rules until he could review and approve them. His knee jerks toward a top-down, field marshal’s approach, but he’s had to learn that his effectiveness at governing isn’t a matter of dictating policies and imposing metrics. The governor has taken steps to cultivate relationships with both lawmakers and the electorate, hosting legislators over private dinners at the governor’s mansion and ditching conservative suits for khakis and casual button-down shirts in public appearances. Resurrecting a page out of former Gov. Bob Graham’s playbook, he conducts “work days” once a month, making doughnuts, waiting tables and doing other jobs with working-class Floridians.

Many of Scott’s closest advisers had little experience in either government or Florida. Perhaps reflecting that fact, his managerial hires have been a mixed bag: Some, like Gray Swoope at Enterprise Florida, have drawn solid reviews. At least seven state agency heads have left since Scott took office for varying reasons, including former Education Commissioner Gerard Robinson. Edwin Buss, hired from Indiana to head Florida’s Department of Corrections resigned after clashing with Scott. Two years into the job, Scott is on his third chief of staff. The second, Steve MacNamara, left after less than a year on the job amid allegations that he steered state contracts to friends. In general, while still showing a preference for managers from the private sector, Scott has shifted toward hiring more people with experience in Tallahassee.