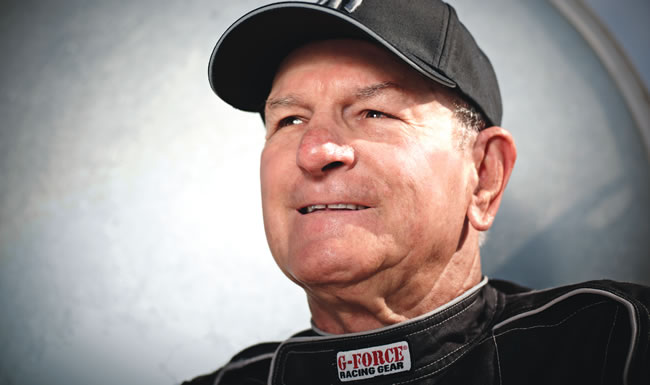 » In the beginning, we actually drag-raced the cars we drove to work. There were no spectators. We put lines on the asphalt and raced on a stopwatch. Then, it caught the fancy of the general public. People built drag strips and charged a lot of money to get in. In 1958, I got paid $450 to show up with my car in Texas, and I’ve been winning races and making money ever since.

» Speed is exciting to me. I’ve been in a lot of wrecks, but I was never scared. Isn’t that strange?

» I’ve just always been very competitive. When I was in school, I wanted to turn in the best paper. I wanted to have the fastest bike. My stepdad would give me a calf and give my brother a calf, and I wanted mine to be the best and the prettiest. I always wanted to excel at everything.

» When people ask me what is your greatest contribution to racing, I say the development of the rear-engine car. I didn’t invent it. I just perfected it.

» In 1994, I ran for Congress from the 5th district. I wouldn’t do it again. It cost me $100,000 of my own money, and my wife teased me for years because I always wanted a Dodge Viper, and she says that was your Dodge Viper.

» I ran because I’m concerned about the government. I still am. I just realize now there’s nothing I can do about it. I thought I’d go to Washington and I’d be a guy who would stand firm and not be bought, kind of like Ron Paul.

» My father was an electrical engineer for Westinghouse, but he retired from that and became a health food nut. This was in the ’20s. He had a health food restaurant, and my mother was the cashier.

» Aren’t those lovebugs hateful? That’s why I have what I call a rat-rod. It’s a ’42 Ford with a real nice engine. When the lovebugs hit, that’s what I drive because the paint is terrible and the lovebugs can’t hurt it.

» In 1970, the transmission exploded in my dragster on the final run, and it cut my foot off and cut the car in two. That’s when I drew up plans for what I thought would be a championship rear-engine car. I would go out to the shop in Seffner on my wheelchair, saw stuff out on the band saw and make the parts.

» Gold backing on money is the handcuffs on Congress. I don’t have to explain to you what kind of financial turmoil we’re in right now, and it’s because Congress spent the money. And why do you think they spent the money? To buy the votes.

» Look at Greece. That’s an indication of where we’re going — only who’s going to bail us out?

» I should be a farmer because my mom married a really nice guy after the divorce from my father. He was a dairy man. They built a dairy in north Tampa by Lowry Park. We had about 50 head. My brother and I and my stepdad milked those cows seven days a week. During high school, you got up at 4 in the morning, milked the cows, cleaned up, went to school, came back from school, milked the cows, did the homework, went to bed, got up, milked the cows. That’s how it went. That really puts the work ethic in you.

» I was in high school, and I was taking an accounting degree, and I finished at the top of my class. I went right to work in the accounting department at the Maas Brothers department store in downtown Tampa. Over breakfast one day — and I always give my stepfather credit for this — he said, ‘Donnie, I can see you’re not happy.’ He told me, ‘You want to go through life doing something you love — and you love cars. You should go work at a garage.’

» My wife has a little bit of all of them, Parkinson’s, Alzheimer’s, dementia. I have a lady with her in the daytime, but at night I take over. She has moments when she knows exactly who she is and everything is fine, but those don’t last long. We’ve been married 59 years.

» I’m on a flight from Tampa to St. Louis. TWA. I look out the window and can’t believe my eyes. Not more than 1,000 feet away is a saucer with no marks on it. It was an alien craft. Immediately, the seatbelt sign went on, and I put mine on. When I looked back out the window, that thing had moved maybe 50 miles away — and it was just glowing.

» Silver Springs is going dry. You know how you solve the water problem? You build no more new houses. If you want to buy a new house, you’ve got to buy a house that’s already here, tear it down and build your new house.

» The worst wreck was the fire in Chester, S.C., in June 1959. No gloves. No face mask. Just goggles. Usually, I would wear just a T-shirt, but fortunately, I had a jacket that my wife had just given me. That jacket saved my life because the fire would have burned right through my chest. I got out of the car and the skin just fell off my hands. Three weeks in the hospital. The doctor wanted to take both hands off, but I said I’d rather die. The doctor asked us to leave, and my wife called Tampa Municipal, which is now Tampa General, and they said they’d take me and keep me comfortable while I died. I recovered and went on to race.

» My oldest daughter is a concert pianist. I had a shop in Tampa then, not too far from where she was taking piano lessons, so I took piano lessons, too, for a year to see what it was like. And let me tell you, it’s tough.