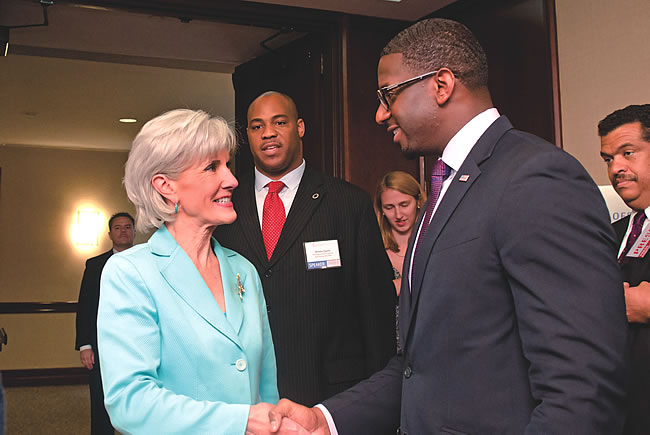 Elected to office at age 23, Andrew Gillum says he felt unprepared at times for what lay ahead. So he created a program that supports other young officials.

Not long after he was elected to the Tallahassee City Commission in 2003, Andrew Gillum was attending a conference for elected municipal officials when a fellow attendee asked him to replenish the sugar and creamer at the coffee station.

“I said, ‘Oh, we’ll have to find some of the wait staff to do that.’ He looked up and looked at me and said, ‘Oh gosh, I didn’t even notice your badge. You’re elected? Well good for you, young man. I’ve got shoes and socks older than you,’ ” recalls Gillum, who took office at age 23 and still serves on the city commission.

Many 20- and 30-something officeholders, Gillum says, have concerns about whether they’ve got the skills to handle the job. Establishing credibility can sometimes seem like an uphill battle.

“It was rough the first several months after being elected. You see that one of your colleagues has near 20 years’ experience, another is a hotshot partner in a law firm and the mayor has his own law firm ... and you feel a little bit ill-equipped to sit at the same decision-making table. Because of that, I was a bit restrained in my early days on the commission to speak up or speak out on things I agreed or disagreed with.”

To help young elected officials adapt, Gillum in 2005 decided to form a group that could “develop a curriculum to help support us as we grow as elected officials.” His initial goal, he says, was to find “35 under 35” around the country and bring them together in Washington, D.C. — but wound up attracting 64 at the launch of the Young Elected Officials Network in 2006.

Today, the network, which is based in Tallahassee but operates under the auspices of People for the American Way, a D.C.-based liberal political advocacy group, has more than 700 members.

Members say the non-profit organization, which is free to join, has provided invaluable training through workshops that help them develop their skills in everything from messaging and media to coalition building. The group, which is ostensibly non-partisan but requires its members to be “progressive” thinkers, also serves a forum where young politicos can share ideas that reflect their values of “freedom, fairness and opportunity and equality for all people.”

State Rep. Dwight Bullard (D-Miami), who was elected at age 31, says he joined the YEO Network in 2010 at the suggestion of state Rep. Alan Williams and found the group’s signature event, the annual National Convening Conference, an empowering experience. “It was awe-inspiring to see all these younger elected officials and meeting people who are a lot younger than me really getting involved with the electoral process,” says Bullard.

The teenage founder of Helping Others and Giving Hope, a Miami-based community nonprofit, and a South Florida real estate agency donated an apartment in Coral Reef to COVID-19 frontline nurses whose home burned down.